I’m not one for keeping track of the years and observing dates. So it came a surprise when WordPress sent me this

What should I do to celebrate? I’m not one for parties. While wondering I looked back to my first posts. And I found this, this little bit of serious nonsense:

But first, a note for those readers who’ve browsed my previous post, Angel in the Park: do not mistake my character’s beliefs for my own. Besides, after centuries of obscurity, angels are hot stuff again. Certainly in fantasy fiction, but also amongst New Age spiritualists. You might think that odd in an age rampant with atheism. But it’s not.

Now I promise not to stay too long on the soap-box, but consider this. Richard Dawkins and his coterie of God-haters might be happy getting off on the amazing science that underlies the rainbow – but since when has amazement equalled a spiritual experience? Rather, amazement is to the spirit what the Phoenician alphabet is to Pascal or Assembler C++ . It’s not just that these folk are 2000 years behind the times – the same things were said by Lucretius (died 55 bce) and Cicero, while agreeing, advocated such talk should be kept between the intelligentsia for fear, without the state religion, the masses might rebel. They also ignore a pertinent feature of human nature: As a species, we’ve evolved with a need for religion that has nothing to do with clinging to childhood stories in fear of our approaching, all-obliterating death. Rather, I’d say it’s our need for some entity, some being, beyond ourselves. In Freudian terms, a projection of our internal parent-image upon the external universe.

3: This missing Dark Mass-Energy, permeating the universe – in its own dimension – cannot be seen by atheist scientists because IT IS SPIRIT!. And that spirit is in you, and me, and the birds, and the trees, in the cats, and the dogs, the fish, and the bees, in the spiders and the snakes, in the rocks, and the sea, in the air, and the planets, the suns – yep, even in aliens. 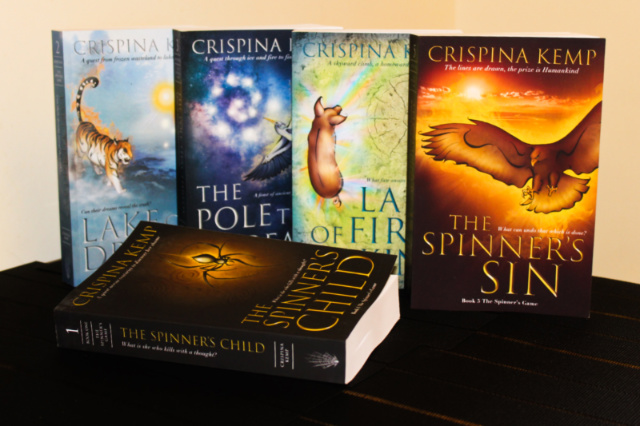 Spinner of Asaric and Mythic tales
View all posts by crispina kemp →
This entry was posted in Fantasy Fiction, Mythic Fiction, On Writing, Thoughts and tagged Angels, The Spinner's Game. Bookmark the permalink.

10 Responses to Time to Celebrate