Who is she, this lady who presides over the south porch portal at All Saints church, Intwood? 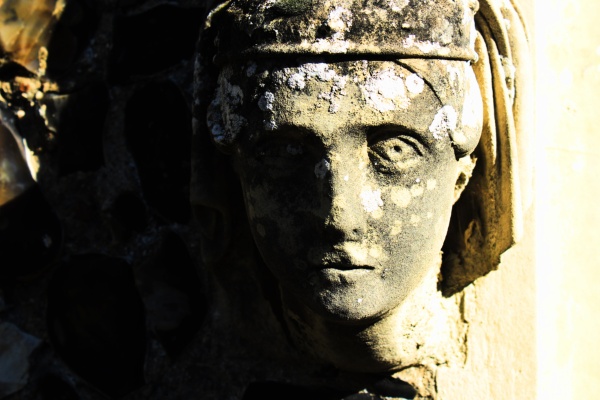 The photo (#picoftheweek: Mystery) I took because … the light, the preservation, the lichen (there’s even a small cushion of moss on her head), and because she isn’t like the others I’ve seen on my travels around Norfolk. She wears neither gorget nor wimple, though close inspection does suggest a light fabric scarf wound round her neck. She wears a circlet over a fine fabric veil; it covers her hair, yet exposes her ears, and cascades down from her crown. There’s a faint suggestion of flowers attached to that circlet, metal flowers, possibly gold. A woman of substance, then.

The circlet together with lack of gorget or wimple dates her to the 1360s or soon after.

The lady’s head serves as the supporting corbel to an arch that frames the south porch door. That porch is reliably dated to 14th century. So now we have an end date for her too. 1400. But we’ll allow a few extra years: buildings aren’t always completed on time.

William of Buckenham, having acquired the manor shortly before 1349 (for a sum) ‘released it’ into the hands of Bartholomew Appleyard, citizen of Norwich, in 1356. It remained in the Appleyard family until the 1440s.

Can we now find a name for our mystery lady? This depends on whether she was wife to Bartholomew (died 1386), or to his son William (died 1419)?

Bartholomew’s wife was one Emma, probable daughter of Ralf Burwell or Bumpstead (both names are given), a fellow citizen of Norwich who alongside Bartholomew Appleyard served as bailiff. Their son married somewhat ‘higher’.

William Appleyard, MP, married Margaret, daughter of William Clere of Ormesby St Margaret. The Cleres had a sizable landholding in East Norfolk and were well connected.

Whose wife was she? I’d say William’s.

And what better way for a wealthy merchant to raise his status than to grace the newly-built south tower of his manor’s church with the face of his ‘well-connected’ wife — decked in the latest fashions, of course.

By total coincidence, William Appleyard was made the first mayor of Norwich in 1404 and would have been involved in the design and erection of the Guildhall featured in last week’s #2018picoftheweek challenge, At the Heart of the City.

As to the husband’s head which would have co-graced that south porch: that has long since succumbed to the many waves of rural violence … political … religious … philosophical.