At the Heart of the City

Norwich, a Viking-Saxon foundation, has been a major trading centre at least since the reign of King Æthelstan (924-939). 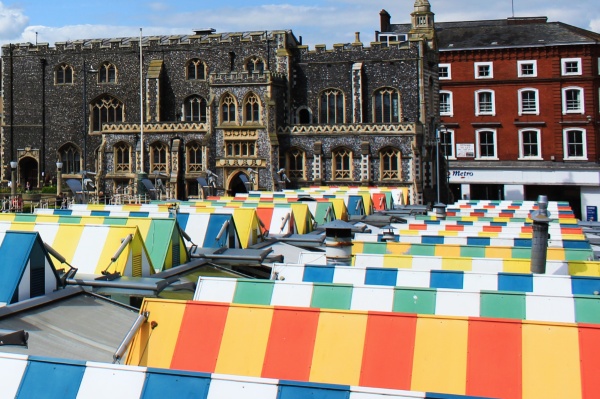 The Guildhall, fronted by the permanent historic market: Photo 3rd May 2018

The marketplace we see today, with its former colourful canvas tilts now replaced in more durable materials, was moved to this site soon after 1066 to serve the newcomers from Normandy, Flanders, Brittany and France. Its predecessor had rooted itself in Tombland (the Empty Place) where the cathedral was soon to be built.

The Guildhall, England’s largest medieval civic building outside of London, was built in 1407, following the Charter that made Norwich self-governing in 1404. It remained the seat of city government until replaced by the City Hall in 1938. Even then it continued to serve as a courthouse, with holding cells, until the late 1970s. Behind it may be glimpsed a more modern trader: Tesco Metro.

Spinner of Asaric and Mythic tales
View all posts by crispina kemp →
This entry was posted in Photos and tagged #2018picoftheweek, Norwich Guildhall. Bookmark the permalink.

12 Responses to At the Heart of the City