For England and Saint… Who?

Of the Four Nations of Britain, it’s only we English that let our Patron Saint’s Day pass without a fuss. One wonders why. Is it because of the famous English reserve? Or is it that we English just don’t connect with him?

The Irish have their Saint Patrick who brought Christianity to their land.

The Welsh have their Saint David, a C6th Welsh bishop of Mynyw (now St Davids). 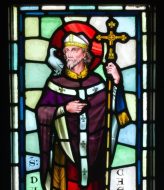 The Scots have Saint Andrew (the Apostle) who they claim is buried in the town of St Andrews. Whether he is or not, he was known in Scotland from the early days of Christianity.

We English have Saint George.

Yea? And who was he? 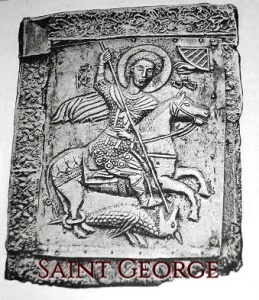 An icon from Georgia

Aka George of Lydda, Saint George was a Greek serving in the Praetorian Guard for the (Eastern) Roman emperor Diocletian whose famous Persecution (303-312) saw the empire’s bloodiest attempt to eliminate Christianity . George of Lydda was one of its fatalities.

Although his cult of the martyr had arrived in Britain by the tenth century, the saint didn’t gain popularity until the return of the Crusaders, from twelfth century onwards. By then Saint George had acquired the myth of the dragon-slayer, a pre-Christian motif commonly found in Anatolia (today’s Turkey).

How did this Middle Eastern martyr become England’s patron saint?

That was the work of King Edward III (1327-1377) who in promoting the codes of knighthood founded the Order of the Garter… and named Saint George as patron saint OF THE ENGLISH MONARCHY. Not of England, but of the monarchy, God Bless Them. In the process he demoted the previous patron saint of England. Saint Edmund.

But who was Saint Edmund? 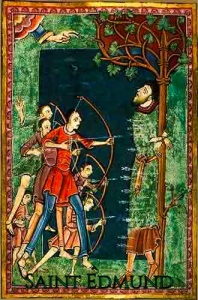 Edmund was an Anglo-Saxon king of East Anglia. In 869 he was killed defending this land against the Great Heathen Army. His death was savagely dealt on the orders of the Dane, Ivar the Boneless and his brother Ubba.

Yet it was their compatriots who, on acquiring Christianity as the condition for the grant of Danelaw (the East of England) then founded the cult of Saint Edmund the Martyr. An English saint, he was recognised by both English and Danes with numerous churches built in his name.

In 2006 folk from Suffolk and Norfolk campaigned to reinstate Saint Edmund, without success.

In 2013, their campaign was taken up by representatives from churches, businesses, radio and local politicians. Again, without success.

Now in this year of exceptional need, I say it’s time to reinstate Saint Edmund. He is, after all, the patron saint of pandemics.

St Edmund’s Feast Day is November 20th. Let’s hope we have reason to celebrate with the Patron Saint of Pandemics.

The flag of St Edmund… carried into battle by English troops until late C14th.

Spinner of Asaric and Mythic tales
View all posts by crispina kemp →
This entry was posted in History, Thoughts and tagged English History, Saints. Bookmark the permalink.

39 Responses to For England and Saint… Who?