Where Shall I Sit? 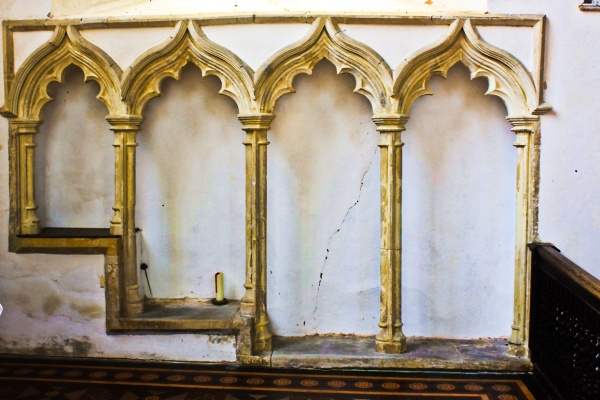 I’m claiming this photo for #2019picoftheweek challenge title: All in a Row which I’m sure you’ll agree qualifies.

But what, you ask, is sedilia?

It is what’s otherwise known as the Priests’ Bench or Priests’ Seats, and is where the officiating persons sat (when not needed) during Mass. The celebrant occupied the highest seat, nearest the altar, the deacon took the next and the sub-deacon the last. I find the sources tangle into confusion where there’s a fourth seat. That sould be that the fourth seat wasn’t a seat at all but, as here, was the piscina (or sacrarium if you’re RC). The piscina was the place for washing communion vessels; the sacrarium being the drain.

It was a particularly English feature (although it is also found in Europe) and flourished during the twelfth and thirteenth centuries.

If you look at that floor and fear for the priests’ hips, bent at such angles, I might just add that the floor of most chancels were raised to set it apart from the nave during all the back-and-forth ideas that erupted during the Reformation and beyond.

Spinner of Asaric and Mythic tales
View all posts by crispina kemp →
This entry was posted in History, Photos and tagged #2019picoftheweek, Church history, Norfolk Churches, Photos. Bookmark the permalink.

22 Responses to Where Shall I Sit?