In last month’s update I intended a straight read-through of Asaric Tales Book 1. What happened? 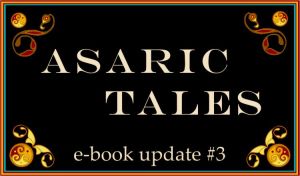 For the first few chapters I used yellow highlight to mark passages/words I wanted to change and returned to them at the end of each day’s reading session to do the necessary. By Ch5 I decided this was a silly procedure; I would make the edits as encountered. Which slowed the read-through. Greatly. Midway through, and the ‘read’ had become another ‘edit’. I also rewrote several passages that still weren’t right. And I thought, hey, next update, I’ll ask for beta-readers.

I sigh. I’m not yet ready. Maybe next week? Perhaps the week after?

[Find] reported zilch on a whole swarm of weasels.  Others were straight deletions. And my word count went down, and down and down. Until …

Before this edit, Book One of Asaric Tales was 4% -ing words. The count now stands at 2.3%. See, not all -ing words are equal. Some use -ing for their very existence: e.g. sing, thing, wing. Others are gerunds, i.e. nouns and adjective formed from a verb, e.g. verb: to live; gerund: living used as both adjective and noun.

The -ings I hunted were the imperfect verbs: e.g. I was editing; I was laughing; I was groaning. Delete ing and was and the verb becomes perfect: I edited; I laughed; I groaned.

The perfect verb adds power to one’s writing while the edit further reduces the word-count.

But it’s not so easy to do by [Find] and [Replace]. The simple was and ing deletion can result in an ugly construction. There were times I found myself deleting – not liking – replacing – rewriting – restructuring, and then undoing to restore to original form. (Lo! A wonderful string of -ings) All of which was time consuming.

My use of adverbs—another hiccup that tends to plague writers—is minimal, and those used are required. Ditto adjectives. And if I pile them on it’s for rhythm, for need and for effect, never for want of a stronger word. I have removed speech tags wherever possible. All that’s left now is …

Another read-through, and that’s top of agenda for Monday morning.

While in the process my eyes and mind will stay sharp for any remaining issues, e.g. unnecessary information, repetitions, illogical constructions.

AND THEN … BETA READERS ON STANDBY PLEASE

Next update, which will include the call for beta readers, expected first week in March.