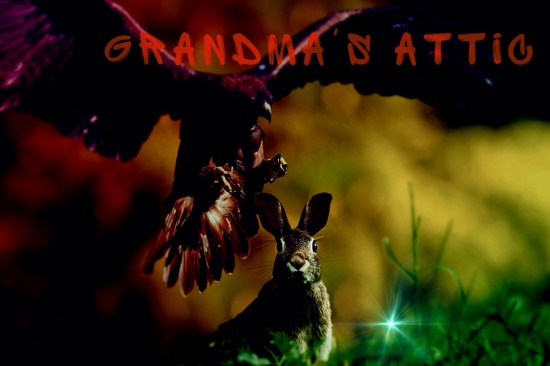 “Can I ask you a question,” Daisy said.

“If you can say it you can ask it.” She was such a bright lass, he enjoyed her company. If only she’d allow him out of this pink so-called palace. It was to protect him from Flirtations Fleur’s lascivious advances, she had told him. Aye, but how was it to do that, when it locked from the outside?

“What do you do in—what’s it called? Dolstone?” Daisy asked. “You know, where you live.”

“What do you mean, what do I do?” He did lots of things. “I go exploring—I like to explore, and there’s always a new cave calling. I play dares with my cousins. I am the most courageous. I can’t say no to a challenge.”

“School?” Why in the name of Grandma’s Drawers would he go to school? School was where the young’uns of Man and His Kind went—children, the offspring of Humans, as Daisy had told him. She’d said they went there to learn.

“But what of your Magical Box of Information?” he had asked her. “Don’t you learn from that?”

“Don’t be silly.” She had playfully punched him. “You can’t use ‘the box’ till you know how to spell. Or at least how to spell close to it—the programme’s good at picking up miss-spellings.”

Miss-spellings; Klukelunnen had grunted. Like the miss-spelling that had brought him to here. Yet … a Stone, a Rock—a gobeling as the professor had called him—he was a magical being; Grandma had endowed his kind with magic abilities at their creation. Aye, so they still had to learn the spells, but they did that in their wee-days. By the time they went exploring the caves—or not in the case of the Diamond Clan, the lazy lot, that’s why they were so easily caught—a Stone had learned all the spells needed for survival. Thereafter, a sneaky peep into Grandma’s Spell-book … Aye and look where that had brought him.

“I mean, what do you do for a living?” Daisy amended her question. “Like, well … like when I’m grown up and leave school and go to Uni and stuff, I’m going to be famous—a gypsy told me. Though I don’t know what I’m to be famous for.”

Klukelunnen frowned. Scratched his head. Sniffed. He still didn’t understand what she meant, ‘do for a living’.

Even with those three little words added, Klukelunnen still couldn’t find sense in the question. “For a living? I breathe. I eat Grandma’s seeds. You might say I ‘work’ to find them but that isn’t so difficult; they’re nearly always in the same place. Unless there’s been a disturbance.”

“But how’d you get money to buy your clothes?” she asked him. “And don’t say ‘credit’ cos I know that eventually ‘credit’ must be paid.”

“Nay, lassie,” he shook his head. “You’re not understanding. Except for the food and water that Grandma gives us, everything else is spelled for. Clothes. Shoes. Ropes. Bags. Everything.”

“So, is that all you do? Explore the caverns?”

He noticed a dull, disappointed note in her voice.

She disappeared off not long after. He thought she’d gone to fetch him some food but …

He sat, as still as the proverbial hard-faced diamond, and listened. In the room outside the pink plastic palace, the window was open, overlooking the drive. It was the crunch of wheels on the gravelled drive that alerted him.

Car doors opened. And slammed. Four pairs of feet crunched their way to the Doley’s front door. An elaborately sequenced chime sounded throughout the five floors. He heard Fleur shooting, “Yea, I’m coming.” He heard her open the door. “Yea? Oh, Dwayne, it’s you! But … did Jace tell you of …?”

Klukelunnen mightn’t know what a warrant was, nor what a Home Office was, but he knew that tone of voice. And when coupled with that Margev-name, it rattled his every sense of self-preservation. He looked around his pink plastic palace. Converted from a rabbit’s hutch, there was no place to hide. Moreover, it could only be opened from the outside; there was no escape from it.

“Daisy!” he called as loud as he dared.

Where was she? She’d be more than devastated to discover him gone. He hadn’t been here long but already a strong bond had developed. She was helping him—if not to return home, at least to understand the allegations laid by this Professor Angelus Margev, holder of the chair for Theology and Religious Philosophy at Cambridge University. Only, Margev was more than just a professor; he was a snivelling servitor to the Usurper. Telling Daisy that he—Klukelunnen—was a dangerous demon. Huh, it would be more credible if he reversed it! That nasty professor, telling Daisy if she continued to befriend him she’d end up cursed forever in Hell. Of course, Daisy had shrugged it, no adherent of the Usurper’s creed.

Oh, squiffles! Where was she when he needed her? All morning with her pestering questions …

“Daisy!?” he yelled again, now frantic. He could hear heavy man-steps climbing the stairs. Fie foo fee fum, I smell the blood of a Stone Clan-man. Nay, he told himself, abandon that thought, put it away. They’ll not catch him. Yet here he was, stuck in this pink palace.

He looked at the door, the one Daisy usually opened—aye, but from the outside— to put him in and help him back out. But even if he could break it down … if he took a run at it (and there was no room to do that), shoulder into it, crack, splinter and … and land smack and stunned on the floor below. Aye, well, maybe it was nought compared to that drop from the professor’s window but that hadn’t been done at a run.

Run, run, run, the word repeated. Aye, the run; why hadn’t he thought of that before? There was a second entry to this ‘perfect’ pink palace. He’d seen it though he’d never used it. Down there, on the floor, hidden somewhere within the run.

In his haste, he tripped and staggered and rolled down the ramp. But once there, how to find the chuffing door. Where had he seen it, visible only from the outside?

The run was constructed of rectangular sections, each a pink plastic frame with a metal grid set into it. Metal … iron, was it? Yet he’d no worries of that; iron wouldn’t burn him being neither Pixie nor Nixie. With ear keen to the sounds from below, he perambulated the run, speedy yet thorough in his examination, leaning heavy upon each section close to the joins. He figured the join would be the place to set hinges and locks. His eyes scanned for leakage of light. He honed his shoulder for any sign of ‘giveage’. But, by the cringe, he did feel exposed. This run was far too open. If those men—the Anthropology Geeks, he knew who they were—if they opened that connecting door …

Ah, there it was! The ground-level door leaked air, a most glorious sign, and gave a tad as he tested his shoulder against it. And where was it? Bang opposite the ramp. How chuffing fortuitous!

He thundered up that plastic ramp, turned at the top, took a deep breath, and thundered back down. No stopping at the bottom; he was head down across that run and barrelling into the door.

The panel exploded in a shower of pink plastic shards and slivers that in falling littered the plastic matted floor. Youch! Daisy would get into trouble for that. But he’d no time to fret over that.

Now, where to hide? He could hear the men’s voices—what were they saying? But, whatever it was, it didn’t matter. He could hear their heavy feet on the landing carpet crushing its plushness as they headed towards him.

Where, where to hide?

Spinner of Asaric and Mythic tales
View all posts by crispina kemp →
This entry was posted in Fantasy Fiction and tagged Grandma's Attic. Bookmark the permalink.