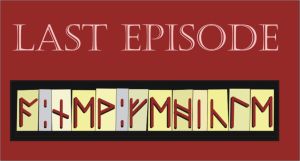 Concluding the time-slip story, Can of Worms, a 16 year girl’s rune-aided hunt for a serial killer . . .  Read on

I didn’t want to go home—but of course I didn’t. I sat in the back of the car listing the reasons. No more discussing the runes with Gamal. Though now I’d started to learn of them I would continue the study. But no more Gamal. I didn’t mind so much no more Toggy, though I suppose I would miss him. No more freedom. Back to work, to knuckling down, to study. Back to Failans Farm to face the music, and it wouldn’t be the version of Drum-and-Bass that I liked. Back to—

“I’ve got the solution,” Gamal interrupted my thoughts.

“Yea? The solution to what?”

“I said I’d put thought to it,” he said. “A five-way win-win. Absolutely perfect.”

“Nah, first I have to ask Arvina. Arvina, you did say, given the right circumstance, you could withdraw from your vehicle while that vehicle still lives?”

I frowned. Why was she taking so long to answer?

“If there is emergent life that I can latch to,” she eventually said.

“It’s okay, Arvina; we get your meaning.” Gamal paused for a moment. Maybe he needed to factor that’ emergent life’ condition into his solution. Or maybe he just needed his full attention on driving. We were approaching one of those confusing motorway interchanges. One wrong turn sends you 500 miles out of your way.

“You remember what Fearn was saying?” he said, interchange successfully negotiated. “Of moving from mother to daughter, though now she was stuck with Florrie ‘cause Florrie only had sons?”

“I remember that something didn’t tally there,” I said. “Didn’t she say she’d been on that farm, and in the same family, since 11-something? Yet, mother to daughter? That farm would have passed father to son. It’s how they did things in those days.” It’s how my father still would if he had a son.

“But that’s easily explained,” Toggy chipped in, “if each generation begot only daughters.”

I screwed up my face at him. I couldn’t see where he was going with this. Or maybe I could and didn’t like it.

“Whoa!” That’s where I thought he was going. “I am sixteen. I am off to college. There won’t be babies for me until—phrrrw, I don’t know when.”

“Yet,” Gamal persisted, “eventually one assumes there will be.”

“What, you want to hook me up with some cyber-wazzik? Just so your buddy can have his Arvina again?” I huffed a good head of steam, crossed my arms in a grump, and sat back.

“Actually, my thought was to free you as much as to free her. Especially if we could provide for her a Bellinn body.”

That took a while to sink in. And there he was, looking at me in the rear-view mirror, with his deep blue eyes.

“Nah,” he said. “Next generation would incestuous. Think about it.”

I did. If I had Toggy’s child—a daughter, it would have to be. I shivered at the thought of it. And Arvina migrated to it. Then Toggy and her . . . He was right, it would be incestuous in the next generation. But what else did he mean?

“Look at it this way,” he said. “While I’m not belittling your brawn, you’re not exactly the most muscled of women. And I happen to know that, even in this mechanised twenty-first century, farming still requires the occasional beefcake—especially when you’re farming organic.”

“Beefcake?” Toggy gawked at him. “You?” He sniggered.

“Your father might be pleased to know there’ll yet be an heir to his family lands.”

“But I’m only sixteen,” I repeated. “I have college. I have growing to do, and I’m not referring to veg and fodder.”

“And I’m not suggesting we go off today and get wed. I think we should have a, um, a long engagement. At least five years. That should be long enough for you to get used to the idea. Long enough, too, for your folks to meet me, and like me, and approve of me—which they will.”

Yea, I wouldn’t dispute it. As long as I didn’t tell them he was an elf, I doubted they’d even mind his dress. I could imagine them, all three, getting stoned together, playing Pink Floyd and extolling the gods. But marriage? To Gamal? A Bellinn, one thousand years old.

Yea, but . . . okay, so I’d happily agree if it were only a matter of the joining of minds. But he was talking of begetting. That fetched a thought, a potential objection.

“And what of the Oath?” I said. “I thought you Bellinn were sworn off begetting.”

Gamal laughed. “Oh, bless you, so very well done. You’ve just given me the best argument yet. In breaking the Oath and providing new Bellinn-bodies we’ll be helping to alleviate a whole host of mental health problems.”

I hissed at him. Bodies, I noted that plural. Was there to be no end to it?

“Aye, as it happens, I do,” he said. “But I can hardly sweep her into my arms while I’m driving. I do promise, though, at the next comfort stop, she’s getting thoroughly kissed.”

He laughed. And as it turned out it wasn’t so much slobbering as . . . let’s say an introduction to bliss. But I still wouldn’t agree to his vehicular solution. Not yet.

The story concluded, what next will follow? I expect to make an announcement shortly. Keep watching this space.

If you enjoyed this last part and want to start again at the beginning, the menu bar at the top provides chapter links to all my stories. Enjoy.

5 Responses to A New Vehicle