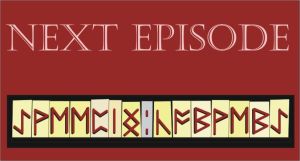 Continuing the time-slip story, Can of Worms, a 16 year girl’s rune-aided hunt for a serial killer . . .  Read on

“Stop! Now!” Arvina shouted at a volume fit to rip off the roof.

Gamal skidded the car to a stop. We weren’t long out of Dorchester; we weren’t yet close to the Axe valley. Why did she want to stop here?

Arvina, now taken full control of my body, pushed open the nearside door. I didn’t think my legs would stretch the width of the road’s gritty gutter. But there I was, standing on the grass-grown verge feet lost in a speckling of the usual roadside offerings—hawkweed, hawksbit, whatever those yellow daisy-things. Hedge parsley frothed around me.

“What is it?” Gamal leaned over Toggy to ask.

“You mean somewhere around here are your bones?” Toggy asked.

“I don’t suppose he bothered to bury me.”

Probably not. None of the others seemed to have been purposely buried, just hidden away and left to rot.

“So, what now?” Gamal asked, now standing close by me/her/us, on the verge—though I’d not noticed him get out of the car. “You want a hazel rod? You want to go dowsing?”

Yea, and what good would that do, to find her bones? Besides, that was just too Maccabean and Gothic for me; entirely not my scene.

She shrugged—my shoulders. Then set off along the verge.

Gamal jumped back in the car and drove off. Hey! But it was only to park up the car.

Beyond the verge was a pasture: deep green grass, ideal for a dairy-herd. Between verge and pasture was a low hedge of thorn. Arvina was looking for a way through it.
Oh no you don’t! You dare to push through there and I’ll . . . What? Punch myself? But she must understand, I didn’t want my new leggings plucked and laddered.

She looked the length of the hedge. No gate there. She looked further off. A house, probably the farmer’s. A complex of metal and brick stood just back from it. In the morning sun the metal glinted, almost blinging. Eyes set on that house, she helled off down the road.

“Can you feel it?” Gamal asked Toggy as they put on a spurt to catch us up.

“It’s not quite a Bellinn feel,” Toggy said. “More like the same as I get from Arvina.”

“From Arwen,” Gamal corrected him.

We came to a track leading down to the house; it ran alongside the edge of the field. And there was the gate she’d been looking for. However, despite fine weather, there was a total quagmire around it. Arvina stopped. Stared. Didn’t venture any nearer. Oh good, cos these were new trainers. Cool label. Comfy. Definitely not designed for wading through shit.

She stood a while just looking—or at least that’s what she seemed to be doing. It seemed Gamal and Toggy were doing the same, though maybe not. There appeared in the lane ahead of us an ancient weather-carved woman, propelled along by a Gandalf-type staff (absent the light), mud-caked wellies, besplattered around the hem of an oversized duffle-coat. What in this weather? She must be crazy.

“Hmmf,” she said as she neared us, in a voice gravelled with age. “Not seen one of you in many a year. Bellinn, full Bellinn, no less.”

“See, didn’t I tell you, Fearn, didn’t I say?” she then said to herself, voice softer, now burred with a southern accent.

“This one, though,” said the gravel voiced Fearn, staring at me. “I swear this one’s another duet, same as us.”

“Aye,” said Arvina, getting immediately what she meant—I was vastly slower. “My name is Arvina. My host, Arwen.”

“Host? Host!” the gravelly Fearn exclaimed. “That’s not a nice name for her. Arwen—she did say that’s your name? Why do you allow her to call you her host? My Florrie never would stand for that.”

I struggled to wrest my voice from Arvina’s control. And succeeded. Maybe because she wanted me to explain it. “No, it was me, not . . . It seemed the best word.”

“Oh.” gravelly Fearn’s jowls jiggled at the shake of her head. “So then, you think your Arvina a parasite do you?”

“Don’t be so hard on her,” Florrie put in, softly. “And don’t be standing here in the lane for all to gawp. You come with me—all of you; I’ll trust you gentlemen though I haven’t your names. Aye, that’s it, come along with me and I’ll make us a cuppa. You agree to it, Fearn, eh, you agree?”

“Gamal. And Toggy,” Gamal quickly introduced them. “And tea would be most appreciated.” Then in my head he said to me, Remember the rune cast, Arwen? The gods intended this meeting.

So the gods might’ve, but must they run their cold fingers down my back to show they’re involved? But the rune cast? I played it again in my head. And there it was. This old lady, Fearn/Florrie, had to be Feoh.
What had Gamal said of it? From death comes life, from darkness, light; a Bellinn transforming from one shape to the next gains wisdom and foresight. And here was a Bellinn, the self-named Fearn, who had at least once transformed from one shape to the next, i.e. transferred residence to a new human embryo. And she lived on a farm. A dairy farm. Feoh, cattle.

“Come in, do, come in,” Florrie beckoned, having led us over a surprisingly clean yard. Whence the mud? Perhaps it wasn’t mud. Perhaps it was slurry. I hadn’t yet seen the herd.

“Frisian,” said gravelly Fearn. “And they’re two fields along. And you’re right, it isn’t mud. No, we’ve been cleaning the sheds—though we reckon our son and his son can manage it without us for the while. Do sit down. You’ll fluster Florrie, you milling around.”

We sat as instructed at a kitchen table 4’ x 4’, on ladder-backed chairs turned from oak, while Florrie brewed us a proper pot. Big. Brown. Ceramic. She set it aside to brew.

“You’re very trusting of strangers.” Gamal said. “I do thank you.”

“And you two are Bellinn,” Fearn answered, “you could have coerced me into it, but you didn’t. But you are a puzzle. Not kin, though you travel together? It’s been a good while since I’ve had a good puzzle to chew on—if I discount him.”

“Who’s him,” Gamal asked, as alert to the potential of that as was I.

“Oh,” Florrie waved it away, like it didn’t matter though it had been Fearn who had said it. “Billy, Joe Harman’s boy. Boy? Huh! Old enough to dig graves for his father—though he won’t do that no more, so his father says. Getting too big for his boots, that one, now he’s got himself a slot playing the comedian at that holiday camp. Ah, tea’s brewed. Sugar?”

Hlæfdi help us, Arvina sniped at me, now they’re making eyes at each other.

Hush, I snapped back. You know full well what this is about. HIM. Guillan—or host of Guillan.

You think it’s this Billy Harman?

“So what’s the puzzle on this Billy Harman?” I asked Fearn/Florrie.

“Because that’s what we are, we two together,” Fearn said. “We are not twins, we aren’t the same.”

“And what do you call each other?” I asked. “Apart from Florrie and Fearn? Cos you’re right, I’d like some better word than ‘host’.”

“Indeed, agreed,” said Fearn. “A word can set the senses vibrating. Attune and align our expectations. You wouldn’t eat a chocolate cake if we called it cack.”

“I call her my wayfarer,” Florrie cut in, perhaps grown impatient with Fearn, perhaps knowing that Fearn’s explanations were apt to meander.

“For I am a traveller,” Fearn again took over, “—as are we all. A traveller through time. Nine hundred years since I was a Bellinn.”

This time it was Arvina who shivered, though I felt it as keen. “W-what year?”

Fearn the gravel-voiced Wayfarer threw up her hands. “I should know? My millennium-and-a-half as a Bellinn was done. I died in a natural way—and at once found myself drawn to emergent life. But this was my first time, it was all strange to me. It was after the Oath, I can tell you that. Yet this was a Bellinn, a Bellinn begotten by a Bellinn upon a Bellinn, and its pull was so strong. But within too short a time I was dead again.” Fearn sighed, her tone turned glum. “My vehicle had hardly begun to form. And that was my last time in a Bellinn body.”

Fearn sighed. “How would I know? Numbering wasn’t done as it is today. Henry the Bastard’s son sat on the throne, does that help? And it was perhaps two years on from the death of his own beloved son. How we mourned over that, we did mourn. Since then I’ve remained always with Florrie’s family. I found them here, and here we remain. From mother to daughter—except now that Florrie has only sons. Isn’t that right, Florrie. Not even a granddaughter. Yet.”

It must have been my own child, my daughter, the child that she took, Arvina said, voice soft with awe. It must have been. What other child was there, after the Oath. “So perhaps that’s what’s attracted me here?”

“Come to find your bones, have you?” Fearn said. She must have heard Arvina’s talk.

“But you can’t possibly have them!” I could hear and feel Arvina’s incredulous hope.

“When the kin a few wheels back—”

“Wheel?” I interrupted Fearn. Arvina might have her own agenda in bringing me here, but now I was here, I had mine. I wanted to learn.

True. I nodded. So Arvina was my wayfarer, and I was her wheel. I preferred wheel to vehicle. A wheel carries along while a vehicle must be driven.

A memory played, and I went with it, to a place of fuller understanding: The cloud is a wagon, a seal-pulled wagon that takes me away to Lord Manawydan’s domain. My first visit to Gamal’s Rune-world, where he was Woden.

“Hello?” Gamal waved a hand in front of my face. “Anyone in there? Ah, there you are. Thought we’d lost you,” he joked. “Fearn was saying, they discovered bones in the ground when they cleared the land for the new barns and the milking sheds out back.”

“Mm,” I said though I hadn’t been listening.

“I’ll take you there. Show you,” Fearn offered.

Next episode, Swords and Stones