Dunwich, situated at the mouth of the Dunwich River, was chosen, c.630, by Saint Felix, the first bishop of the East Angles, to be his seat. And there the East Anglian bishopric sat until the thriving kingdom was overrun by Vikings. Or so the older history books would have it. Today, historians prefer to set that seat somewhat south at Walton Castle, near Felixstowe.

However that may be, as the country’s thoughts turned to commerce, ports and trade, so Dunwich built up its harbour and surrounded it with merchant halls and warehouses.  It boasted three churches and a population of 3000 at the Domesday Survey of 1086. By C13th the one-time village, now turned town, rivalled London in its size and population; 9 churches are recorded, a Franciscan and a Dominican priory, and a Knights Templar Preceptory. Alas, cruel fate put an end to its growing.

A storm surge, familiar to anyone living on the East Anglian coast, helped bring in the New Year of 1286 and swept away a portion of the town—East Anglian cliffs comprise compacted sand; not safe for climbing on, they regularly calve just with the weather. Two further surges, one early, one late, followed in 1287. And then a reprieve, a time to rebuild. But not for long. The surge of 1328 saw more losses. That of 1347 accounted for some 400 houses. And finally, in January 1362, the sea gobbled most of what was left of the harbour, the port and the town—or so say the old history books.

But as with St Felix, it’s not the full the truth of it. Though the parish church of St Leonard’s did succumb to the sea in C14th; and St Nicholas’s was lost soon after the Black Death (though the wiki article I plundered for this doesn’t say which episode of the Black Death); and yes, St Martin’s did disappear in a tumble of stones between 1335 and 1408. Yet witness:

Not quite the immediate catastrophe we’ve been told. And yet the town’s former growth was halted, it’s thriving trade failed. So what happened; what is the truth?

The surges, devastating though they were, did not destroy the busy port. The collapsing buildings—not only churches but houses and merchants’ halls—disastrous with their untold loss of life, yet could be re-sited and rebuilt. No, the real cause of the town’s demise was what happened to the river. 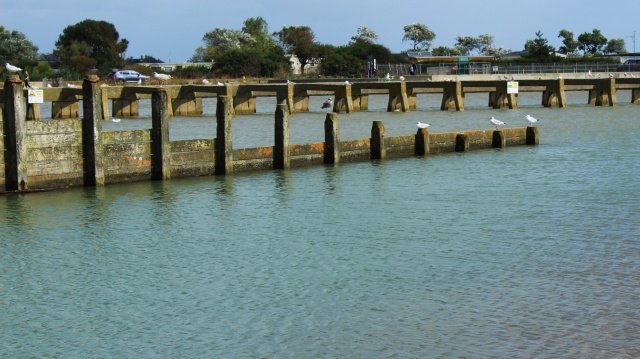 Where the two rivers join, the Blyth and Dunwich: Photo 6th Sept 2017

The port had developed as a sheltered harbour. But a harbour needs egress to the sea. And those storms, and general coastal processes had worked to block that harbour. The same happened several times at Yarmouth, north of Dunwich. Indeed, at one time the river Yare discharged 8 miles south near Lowestoft. But each time the Yarmouth merchants and aldermen got it together to cut a new channel to keep the port open. Not so at Dunwich. The Dunwich River discharged ever farther northward until its outflow joined that of the River Blyth at Southwold—which town then took its trade.

It seems our historians in the past preferred their accounts to be more . . . dramatic!

Spinner of Asaric and Mythic tales
View all posts by crispina kemp →
This entry was posted in History, Photos and tagged Coastal erosion, East Anglia, History. Bookmark the permalink.