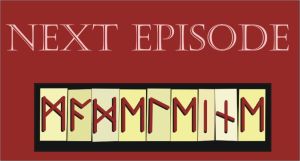 Next day, Madeleine, my friendly psychiatrist, graced me with another visit. First thing she asked was about my parents. Had they visited?

“But still no clothes?” she said.

“That is . . .!” She was too professional to call him base names. “I shall have words with him before I leave here. What’s his name?”

I didn’t know. “I’ve only seen him the once—at least, while conscious—and he wasn’t wearing a name-tag. I particularly noticed.”

“Hmmff. So, he may not even have been a doctor? He could have been one of your fellow patients, playing up. No mind, I shall try to sort this before I leave.”

I had to grin. Yea, go, Penner, go! To say Madeleine Penner was displeased doesn’t begin to describe it.

“So,” she said, calm regained in record time. “First, what of the voices? Are you still hearing these thoughts?”

I scrunched my face hoping to give a kinda neither/nor impression while I gave it some thought. Despite it would have sounded crazy to most folk, Madeleine had readily accepted my theory of Arvina being a ghost who had latched onto me. But I couldn’t see her buying into the Bellinn story even if I rebranded them as elves. Yet, by now, I was pretty sure that my telepathic powers weren’t mine at all but had been given me by Arvina. As she gained an ability to express herself to me and through me, so these overheard thoughts diminished. Or perhaps it was as Gamal had said of the decapitation scene, that Arvina had been using the jumble from people’s heads to gain my attention. I suppose she couldn’t just tap on my skull and say, ‘Hey, you out there, look, I’m in here.’

“They’re lessening,” I said. Which was the truth: I hadn’t heard a peep from Madeleine’s thoughts.

“That’s good. So maybe your father was right to give you a rest away from the pressures.”

Yea, sure, like I had no pressures in here? Like, where were my clothes? And was that fella really a doctor? And if he wasn’t, then why hadn’t I been seen one? I’d seen only nurses, and those infrequently.

“He’s the Lyme Bay Killer,” I said. Blurted. I’d said the same to Gamal. He’d thought it likely, though he’d not stamped it.

Madeleine barely betrayed surprise, yet I knew it was there. She’d halted a moment before nodding. “You think he, like your Arvina, is possessing a host and . . .?” That’s what Gamal had thought, too. He’d said of seeing a double signature in the Rune-world, same as with Arvina. Again, Madeleine nodded. “It has been . . . known . . . speculated. Suggested. With multiple entities. But, tell me, what makes you think this Lyme Bay Killer is Guillan?”

“M.O.,” I said. “The victims both were teenage girls. Both with red hair. Both decapitated. It’s a repeat of what he did to Arvina.”

“Ah,” I saw the crack in my theory. “Not quite that young. Though I don’t know the when, I do know it was after the White Ship Disaster. So she’d have been . . .”

“She’d have been twenty-seven in 1120,” Madeleine cut in while I was still calculating “—but let’s set that aside for now.”

She’d been quick in her calculation, not knowing the full story thus not distracted by the sudden, gut-wrenching realisation of how young Arvina had been when she ran away to Brittany with Guillan. Juvenescent—barely into her teens. And he had raped her? Okay, so there were no under-age laws then, and he’d used Bellinn coercion, not violence. Yet it amounts to the same. I hadn’t liked him before; I felt total revulsion now.

“This of the White Ship Disaster,” Madeleine said, “what makes you think Guillan survived it?”

“Arvina said,” I answered straight off, eager to be on a different subject. Though it had been Gamal, not Arvina,  who’d said of it.

“Okay,” she said. “So, let’s look at this. It was said ‘no survivors’, yet not all the bodies were found. So, yes, if he was a good swimmer, and kept his head . . . even the Titanic had its survivors. He could have reached shore away from the others. Laid up till he’d recovered. Then, for whatever reason, he could have taken another identity. He could have joined a monastery, even. So, yes, Arwen, I can see the possibility. It might even tie in with my query of him. Did you know he had a brother—and I don’t mean his younger brother Hugh who, on Guillan’s . . . assumed . . . death, inherited the Bigod estate. No, apparently he’s supposed to have an older bother. Humphrey.”

“That’s not possible!” Arvina blurted through my lips.

I couldn’t object for I agreed: it wasn’t possible. If he’d had an older brother that brother would have been a Bellinn too. And I’m sure, even if Arvina didn’t know of him, Gamal would have. Besides, if there had been an older brother, would Guillan have felt his mother’s desertion quite so keenly? Okay, I could be wrong on that, I’m not the psychiatrist. But at least one of the Bellinn would have been friendly.

Madeleine smiled benignly, as often she did. “I don’t know why such a heart-felt denial—has Arvina said something? But you’re right, at least at first glance. The dates are all ‘turvey. Humphrey Bigod became chaplain to the first King Henry. But before that he was ‘prebend to Totenhall’, from 1101. Though I confess, I don’t know how old a cleric had to be, then, to be a prebend, but I’d say probably at least 18. That would push his date of birth back to 1083. Yet it’s believed your Guillan—William Bigod—hadn’t yet reached majority when his father died in 1107. Historians point to the absence of his name in the witness lists until 1113, when he suddenly appears. The following year he was appointed Sheriff of Norfolk and Suffolk. The year after that he appears in Normandy with the same King Henry, as Steward to the Royal Household. If they’re right, and he wasn’t twenty-one—the presumed age of majority—until 1113, then he couldn’t have been born until 1092.”

“No,” I said. “That can’t be right; it makes him too young. Puts him only a year older than Arvina, yet in 1106, when she was thirteen, he was most certainly at least sixteen. He’d recently returned from King Henry’s court, to train into his father’s business—estate management, I suppose. Or how to be a mean and nasty sheriff?”

“And? Where’s the problem?” I could say that now cos while she’d been throwing dates around I’d come up with a plausible answer. And it was so simple. But I remembered Madeleine had a soft spot for the Bigod family, so I let her rap on.

“Primogeniture,” she said. “Although it hadn’t yet become the de rigueur principle it was later to be later, yet, as a general rule, it was adhered to. So why wasn’t Humphrey the heir? Why was it your Guillan?”

“Because first-born Humphrey was illegitimate.” There, I’d delivered the coup.

She up-slapped her head. “Of course! And here I was thinking he must have been the son of the elder William, Roger’s brother. So, solved. I thank you, Arwen. But, to return to what you were saying of Guillan, that he survived the Disaster, and that it was post-1120 when he killed your Arvina. Has she told you yet what she was doing in the interim? Between 1106 and 1120? I’m sure they weren’t married. Daughter of Gunnhild, that would have been noted by someone. Some chronicler somewhere, I’ve no doubt of it. If not for her mother’s sake then for her father’s. I don’t suppose King Harold was that soon forgotten.”

I kinda shrugged. “I’m sure they did intend to marry—at least, they eloped. Set off to sea in a little boat. But his father found them. By then she was pleased for it. Arvina didn’t much like being at sea.”

You want to know what I was doing, those years? Arvina’s voice was loud in my head. I was with Toggy.

Yea, great timing, Arvina. But at least now she’d discovered how to contact me direct perhaps there’d be no more grisly dreams of decapitation.

Even so, her words acted as prelude to another, enforced, afternoon nap. I did wish she wouldn’t do that.