A Hailstorm in Summer 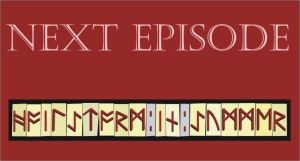 “Þe! Run-frea!” The words came from my mouth yet it wasn’t me spoke them. Wasn’t even my voice. Hells, I could never shout that loud. And the language? Sounded kinda German to me, with an odd German accent. But I knew who it was. Arvina.

She had surged out of her cage at the first sight of that black befrocked Woden, waiting as promised beyond the trees. Why she’d remained quiescent earlier, when I was talking to him outside Green Haven House, I really don’t know. But I was glad that she had. Perhaps she, too, had a social horror of making a scene. Now, here in the flesh as much as she ever could be, she had taken control of my body—why had she left me my thoughts? At least those previous times she’d done this to me I’d not been aware of it, and not had to suffer this blithering frustration. I was powerless, unable to move unless she moved me; unable to speak unless she spoke for me. And why she had left me with physical feelings . . . Ouch! The bitch, having slipped out of my slippers at the edge of the meadow—should I be thankful she’d kept them on through the trees—she then ploughed heedlessly through thistles and nettles and everything else sharp and prickly.

“Arvina” Woden greeted her—me—us. “I knew it was you.”

“It was not me, it was her,” she said, same Germanic accent but now in English and with a vague wave in no direction. “I am Arvina. She is Arwen. I am daughter of Count Alan Le Roussel and his lady Gunnhild. She is child of the Elvins. We share her body. And you, Run-frea, I ought to kill. You ought, at least, to pay my kin a blood-fee—with interest accumulated down through the years. Nhh!” She finished with a definitive nod.

He held up his hands. “Ay-yi-yi-yi-yi, never did Loki open such a worm-filled can! We must talk, you and I. But whether we stand, sit or walk –” he looked down at my feet (it could have been worse, this could have been winter, there could have been mud) “– I leave that to you, Lady Arvina.”

“Huh,” she snorted. “We will walk. You think I’ve not had enough of confinement—and what recompense might you give me for that?”

That wretched Woden, I did feel sorry for him. My resident ghost was blaming the wrong person. She should have been ranting at Guillan. I suddenly wondered, if Guillan hadn’t drowned in the White Ship Disaster, as Madeleine Penner had claimed, was he still alive? I couldn’t ask: I’d no voice. No effing choice either but to tramp barefoot through that meadow. We didn’t go far, just back and forth alongside that screening band of trees.

Yea, I’d like to know the same. Was I right: was it because of the gand-stangir? And if so, how?

“He—your obedient runester—lopped off my head. Because I turned out not to be the Torch you had promised—”

“Whoa! We’re talking of Guillan Bigod here? But I never did promise him any such thing. I don’t make promises, never. And neither was he ever my ‘runester’. Where’d you find such a word? I’ve already told Arwen about it; I cast the runes for him, that’s all.”

I could feel Arvina’s tension loosen. I hoped, now, she’d release my body. But nah.

Oh, glorious relief for my feet! I’d thought them on fire.

“But if not from you,” she said, “whence his knowledge? I don’t mean the runes; I mean the Bellinn-ways. He was raised away from them, same as my mother, and she’s a nestling considering her nock. I always was stronger, I’d had Hegrea to teach me. But him? Guillan? He was stronger than me.”

Woden lifted a shoulder in a part-shrug. “So, what have you done, these past . . . nine hundred years? Is it really that long? Yet Arwen tells me so.”

She nodded my head. “Nine hundred, aye, since my first death.”

She snorted. “Aye, and that’s another issue I’d like to take with you. Though it’s not just you, it’s all you pre-Atonement Bellinn. Whose clever idea was it to take that ridiculous Oath: Thou shalt not beget? Aye, you wait till your time comes to wither away. But that’s just the body. The Bellinn within us remains. And that Bellinn is as much Asaric as were the Asars. It seeks a new life. It’s driven, compelled, it must live. But where is the Bellinn baby it needs? There are none! So, what have we but to creep into the nearest foetus then available? You know how many times I have died? How many times I’ve had to do that? And I’m not alone. Every Bellinn that dies—every one of them, clawing at life. Yet we cannot bring our longevity with us. Cannot even bring our light.

There, Arvina had had her say. With a definitive harrumph, she aggressively slammed her arms close across her chest. Um, my arms, my chest. “So, now, you have your answers, I leave you to Arwen. Though, you think on it. I want my blood-fee, whether from you or from him. From somebody.”

First thing I did on recovering my body was to rub my feet. Just because I was born a Piscean, doesn’t mean my feet have to suffer.

“Wow,” Woden said. “That’s one angry Bellinn you’ve got in you there. Were you aware—could you hear?”

I nodded. “She’s not quite what I thought her. Not a ghost, is she. But neither is she part of my psyche.”

He nodded. “Neither. And I’ve still many questions for her.”

“Huh, you have? At least you being Bellinn you know what the frecking-heck she was on about. Like, ‘cuse me, but what’s a chuffing Asar? And what’s the Atonement? And . . .” And I’d thought I’d got it all sorted with elves.

“You want answers? Sitting comfy?” he asked. Despite his recent ear-bashing, he seemed in high mood. “Ready for a story that’ll blow your mind? But first, do you want me to skin one?” His hands went to the pouch fixed to his belt. “Do you . . .? Grass . . . weed?”

I shook my head and waved that away. I was already feeling like I’d fell down a rabbit hole.

“Mind if I . . .? No, you’re right, best not. So, once upon a time, way up in a realm beyond the rainbows—above even Asgard of the Northmen’s dreams—was the most beautiful being. Breath, she was, and with Fire she’d been born from the black abyss. Breath and Fire had already created wondrous beings of colour and song—angels, the Churchmen called them, though they’re not. But now Breath wanted to create something . . . other. Something more complex, having more form.”

“Nah, I told you, above the gods—above even Asgard. And as she desired, so she created—she created you humans. But her colourful, sweet-singling, first-created weren’t happy at this. They were being slighted in preference to others. They turned against Breath. They rounded up all her helpers. And in one great hailstorm, they threw these accused offenders out of their realm.”

“And my name’s not Woden. Why call me that? Ah! You think me out of my head?” He laughed, then sobered. “Nah, but don’t tell me you think me the rune-god? I’ll have you know, young lady, my name is Gamal. There,” he leaned towards me, “I’ve given part of my power to you. Gamal, son of Asny daughter of Zemowit the Asar.”

Zemo the . . . Asar? That could interest me, considerably more than his ancient myth created for kids. But how to lead him to tell me more?

“Okay,” I said. “So, this high-above goddess created we humans, for which she and her helpers were kicked out of their god-realm. And they fell, I take it, to here?” Why else the story?

The fella in the black frock—whose name was Gamal not Woden—nodded. Enthusiastically. “They were condemned to live on this Earth, amongst those they’d created, in their exact forms, for twelve thousand years. But even then they’d not be allowed to return to their realm unless some human was found, untainted by them, who’d speak well of them. And thus did Sir Guy speak and with it began the Atonement. But when the Asars returned to their realm they left us behind. Their begots, their half-breeds, their children—the Bellinn, the Brictan, we’ve been known by many a name.”

“So . . . what are you saying here? That these Asars were, like, kicked-out gods? And from them came you Bellinn—what my ancestors knew as the elves?”

“The Asars took human form,” he said. “That was their punishment. They were even begotten by human fathers upon human mothers. But they were not human. As you say, they were gods. But not just ‘gods’: they’d once been above the gods. And even now, in human form, they were immortal—though, aye, they could be killed. Yet upon their death they were, within the nine months, again born to this world. And that required a Bellinn’s child, for none but a Bellinn’s body can sustain them.”

He sat, quietly now in his faded black frock. I guess he was waiting while I absorbed it all. While my thoughts shuffled to make room and accommodate, to splice all this into my pre-existing knowledge and theories. I guess, at an unconscious level, that’s what was happening, though I wasn’t aware of it.

“So,” I said. “What was this Oath that Arvina was shouting about?” Whatever it was, it was that which necessitated her borrowing bodies. I wondered how many borrowed in nine hundred years. Though it seemed Bellinn requirements were less than Asaric. Apparently, they could survive by sharing a non-Bellinn body; just not as a separate entity. But . . . had Arvina ever thought that each of her hosts was a feeling, thinking, caring person? Did that not bother her?

Gamal sighed. “The Oath. If you had seen the pain on the faces of the Atoning Asars, that they must leave some of their number behind . . . you would not ask. With no newly-begotten Bellinn bodies, those remaining Asars who currently were Bellinn-embodied would have nothing to hold them to this world when finally freed by death. They then could join with the first Atonement. We thought it right to refrain from begetting. To allow the Asars to escape. We weren’t thinking of ourselves, we Bellinn. And now, listening to Arvina . . . what pains have we have caused our own kind? I’d say not to think upon that.”

His high mood had gone. He sat, droop-shouldered, his face now glum.

Though he’d said not to think of it, of course I did. Down through the centuries, men and women sharing their bodies with these Bellinn who were desperately clinging to life. I live in the twenty-first century, born millennia year, yet my GP had labelled me schizophrenic, my mother had thought me schizoid, my teachers thought me ADD, my father feared I might be mad like a relative of his. What hope, then, for those in the centuries before me, labelled insane and locked away? What of those who were accused as witches and condemned to the flames and the stake?

5 Responses to A Hailstorm in Summer