The road from Great Yarmouth to Norwich crosses the former ‘Great Estuary’, now better known as the Halvergate marshes. Travelling by bus, I’m free to gaze out the window, to enjoy the serenity of this landscape, dotted with windmills, with the occasional swan-couples breeding, and the distinctive herons and egrets in flight. And, of course, the grazing animals.

I have recently learned that these marshes weren’t drained until almost into the eighteenth century. 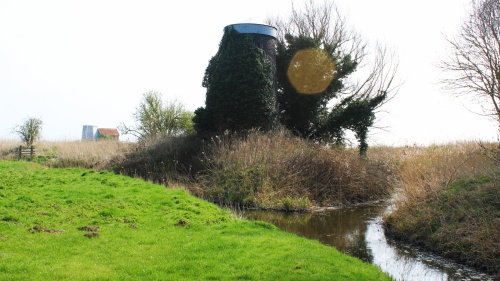 Before then, their winter face was one of lakes, fens and quagmires, and in the summer, able to support only the light feet of sheep. The drainage proceeding, the Halvergate marshes have since become famous for supporting large herds of cattle. But of late, another herd animal has been seen enjoying the sweet grasses. Horses. 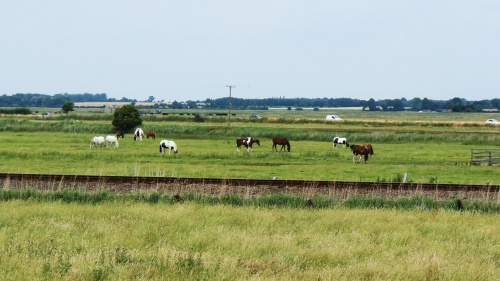 Horses grazing marshes alongside GY-Norwich A47 (photo taken from north banks of Breydon Water, ‘beyond the tracks’; not so close but somewhat safer than standing by that road): 9th July 2017

Of course, horses have always grazed here. But in small numbers, the precious livestock of local farmers or marshmen—or their children’s pets. I remember (way back in the ’80’s) encountering a small herd of palominos—by which I mean 5 or 6. I’ve had to dodge a territorial battle between a shire and a Shetland pony (the pony was the aggressor). But a few years ago, larger herds began to appear. At first, I took no notice of these, expecting them to be there just the one year. But, no, another year came, and there were more. They still are grazing there, their numbers greatly increasing.

Curious of this, I remarked on it to the woman sitting next to me (I’m always chatty with strangers on buses—I am the annoying person!). She said they were Polish horses. By which I took her to mean the ‘Polish Ponies’ more correctly know as Konik, the modern-day hybridised descendants of the primitive Tarpan, which themselves were probably brought to Europe by the horse-herding Indo-Europeans from their homeland across the Steppes. In recent years, various conservation bodies have brought in these Konik graze the delicately eco-balanced fenny meadows.

But, as you can see by the photo above, these Konik are somewhat distinctive; I would recognise these for what they were, no problem. Besides, those grazing our marshes are mixed herds—mixed in breed and in age, from ponies to carthorses, thoroughbreds, piebalds and skewbalds and gypsy cobs.

Not a brilliant photo, but it does show the variety of breeds in this herd; Photo taken 9th July 2017

I asked this woman, how come these Polish ‘horses’ are grazing our marshes? I mean, have they been shipped from Poland just for the sake of the Halvergate grasses? Which might imply a lack of grazing in Poland though that seemed unlikely. The woman suggested they might belong to someone amongst our growing Polish population. Hmm, I thought, perhaps.

And so another year went by without me thinking more about it. Then, one day, making this journey, alone, I pondered some more on it. The sheep were the earliest grazers of these marshes, bred for their wool, but used, too, for their meat. Then came the cattle. Okay, providers of leather, but mostly seen as meat-on-the-hoof. So these horses . . .?

I felt sudden revulsion, a typical British reaction (I tried it on a few ramblers I met while taking photos; they all reacted the same). See, to we Brits the thought of horse-meat is . . . well, unthinkable. I’ve always thought that a particularly British attitude, knowing that horse-meat is found on almost every European plate—except in parts of Spain; though, oddly, the Wikipedia article on food taboos remarks ‘not Poland’. Anyway, that set me thinking further.

Why are we Brits so delicate of it? Would we rather go hungry, and risk starvation, than eat a horse? Seems so (though when I read further it seems we would not). But why this refusal? Is it that, to us, horse-meat is as much taboo as pork is to Jews. And if so, then why this taboo? Surely not for the same reason as the horse is also taboo for Jews (it doesn’t have cloven hooves).

The White Horse at Uffington (not a pub but a hill-carving). Photo from National Trust; https://www.nationaltrust.org.uk/white-horse-hill

You might look at the Uffington White Horse, and other chalk carvings in southern Britain, or point to the number of early coins minted in the same southern region of Britain (which also feature the horse). You might throw in the horse-icons of Epona from Gaul and conclude that at least the Celtic portion of we Brits have been horse-fixated for at least two and half millennia. And you’d be right. You might care to add evidence from Celtic mythology: the Irish horse-goddess Macha, and the Welsh ‘Great Queen’, Rhiannon. Yea, there’s no denying it: In times past, the Britons revered the horse.

So, is that the reason we modern-day Brits won’t eat horse-meat? No. Or at least, not entirely.

This was probably during the saint’s visit to Rome, when he was raised to archbishop of Germany. Despite Saint Boniface was Wessex born, his mission was to the Germanic peoples of the Frankish Empire (note, not Celts). Pope Gregory III called the eating of horse-meat a “filthy and abominable custom”, being associated with pagan rituals (those of the Germanic Odin, not the Celtic Great Goddess). Reading the subtext here, this pagan custom would have seemed to the Christians a parody of their Holy Eucharist. i.e. the horse as the sacrament; eating the flesh of the god. Of course, it was banned. One assumes (though I’ve failed to find evidence) that a similar ban had long-since been widespread through the Celtic Fringe, some of which had been converted to Christianity while still part of the Roman Empire.

Yet, here, there’s a glaring contradiction. The very places where Saint Boniface preached and converted are those came places which, today, regularly eat horse-meat. So, what happened? Why have they discarded the ban, while we have not?

In France, it was the French Revolution put horse-meat back on the menu. Since only the aristocrats could afford a horse, as these aristocrats slipped from their saddles, so their horses became food for the masses—far more nutritious than Marie-Antionette’s famous ‘cake’.

In other European countries, widespread hunger, especially in times of war, broke through the ancient prohibition. In many of these countries horse-meat is now considered a poor-man’s meal. In most of these countries it is an ingredient only of sausages, seldom eaten as steak.

But what of Britain and Ireland, both Celtic and Germanic? How come we’re the last to hold out?

Well, actually, we’re not. Until the 1930s, horse-meat was regularly fare in Yorkshire. But. then, we all know that’s an area, historically at least, more Norse than English. Yet, when you start looking, you find horse-meat consumption cropping up in times of hardship, right across Britain, with no geographical restriction. We Brits have eaten horse-meat. But only when times were really hard. And I can imagine, even during this past century, there were  many a poor family who went to the knacker’s yard, precious pennies in hand.

Perhaps the one striking difference between we Brits and Irish, and the rest of Europe, is that here the horse was early given pet-status (this, incidentally, is also found in Poland). One does not eat one’s pet. That’s verges on cannibalism.

So, back to the original question, of these horses that now graze our marshes.

I can only assume that my informant miss-read the Broads Authority’s web-site where it says of ‘Polish Ponies’—but it also says these have been brought in to graze the various fen areas within the Broads Area. The Halvergate marshes are marshes, not fens. Oops! You won’t find any hybrid-Tarpan descendants here.

The truth  of the horses’ identity took some searching. But with the help of my good friend Google I finally found it. These herds of mixed horses belong to Hillside Animal Sanctuary—who rescue and care for maltreated animals. Oops, and double oops.

And to the fellow I met on my way to take the photos (above) of these horses, I do apologise if I misled you with my miss-information. And he was a vegetarian, to boot!