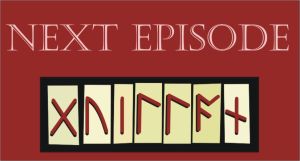 Guillan’s voice bears a calling-charm which enchants and enfolds her. It pulls here towards him whether she wills it or not.

Aye, Arvina wills it, though until this moment she’s been unsure. Now, surely the runes are confirmed? Just as he claimed, she is his Torch, his completion—not that she’s yet got the full drift of that. And if she is his then he must be hers. Her thoughts run swifter than her legs, thinking on this. Together, as one, that’s what he wants. And with him as heir to his father’s estate, she too shall inherit. She has only to wait till old Bigod dies . . . then shall her kin be restored to their ancestral property. It must be so: the runes have said it!

Oh, how wrong her mother to warn her against him.

In moments, she’s in his arms, he wraps them around her. She feels his heart beating, she feels the heat of him—such exquisite charges to her senses! Never has she felt this melting of barriers, this melding of beings, this . . . Is this love? Is this what fetched her mother from her nunnery to be with Alan Le Roussel? Ay-yi-yi, she no longer holds wonder at it.

As her grin begins, so his lips seal over it. Aye, and she who has never been kissed! Such soft lips, has her lover. And she cannot deny him: she is totally and fully his. She nigh climbs upon him to gain closer union.

But he breaks their kisses. He moves her away. He looks at her. She feels it as a physical tearing, a pain. Then, bliss-of-the-days, he, too, grins—and looks back over his shoulder.

“Horse,” he says—and she thinks he’s using her rune-name. But then, “Ranger,” he’s calling his horse.

The tall black stallion ambles towards them, meeting them midway through Felebruge’s fertile fruityard. There must be many an omen there! He mounts. And she’s distraught, thinking he’ll leave her. She could not bear it if he were to leave her now. But nah, he hauls her up to sit behind him. Then, before she has time to tuck in her skirts and arrange all into folds, he’s heeling the mount and the mount is off like a hell-hound!

Never, not ever, has she been on a horse when it’s so recklessly charging. She clings tight to Guillan, terrified lest she should fall. And even then, were she not to be, by Thor and by Hœnir, at this speed it surely would hurt. A lot.

He hears her fears. Arvina, my heart, you are too Dane in your ways. We Bigods are Franks, and so, too, must you be.

“Yet you have a rune-master!” And that never is Frankish, that is Saxon and Danish.

She doubts he has heard her, what with the horse drumming its hooves on the road, and the wind whipping around them—and now they’ve come to Crows’ Mere where the birds are especially loud. She repeats what she’s said of his rune-master, direct into his head . . .

And there she comes to a heart-shattering stop. What is a barrier; why has he sealed his head against her?

“Guillan?” She taps on his pearl-seeded shoulder, though that woollen coat is too warm to be wearing this day. “Guillan, why are you blocking me?” How can they be one, together, completion, if he is to block her thoughts from his mind?

And still he ignores her, heeling his horse, this black-coated Ranger, to yet greater speed.

But of course, now she sees it! He needs give his every thought to controlling the horse. Likely he and the horse have now become one. He hasn’t a thought to spare for her. Aye, that’ll be it.

She’s pleased, now, to have reasoned it. Please to be happy in their love, better than that panic she felt for too long a moment, all pained within. She wraps her arms further around him and rests her cheek against his back—though those pearls dig deeply into her cheek.

Beyond Crows Mere are sheep meadows. She hasn’t travelled so far before, and neither plundered a head that knows it. It’s all full-new to her, acres and acres, all unfenced, unhedged, divided only by hurdles and that into pens, and grouped in their pens, the sheep. And beyond . . . she knows what is there, she’s been told of it, but she is yet to have her first sight of it. At the thought and the prospect she’s all excited, a child hunting hares’ eggs. She strains to see past Guillan.

And aye, there! Seen in the dip of the land. So blue! So very, very dark, dark blue. Like woad-dyed woollen weave. And now it rises above the land, though she knows that’s only illusion. A ribbon, it is, a band. Now a sheet. Now fully exposed, like a plain—except it’s not land, it’s the sea.

Guillan reins in the horse. Too abruptly, the horse doesn’t like it. It rears. Arvina fears to fall and again clings to Guillan.

“You want to decapitate me? Let go!” he snaps at her.

She starts to deny—then realises what she is doing. She’s pulling too tightly on his coat and it’s cutting his throat. She offers apologies—in polished-court French.

He hands her down from the horse, his mood restored. His arms again wrap around her, though now from behind. She feels his head resting on hers. She feels his breath disturbing her hair though that must now be a mess, she has worn no head’chef.

But she doesn’t get what he means.

“Down there,” he says, walking her now to the edge of the cliff, “there is my boat.”

So he says, but she can’t see it, not without looking far over. He pulls her back from the edge. “It’s unstable. Breathe too heavy, that cliff will fall.”

“Yet you keep your boat down there? Is it safe?”

She doesn’t mean to criticise yet that’s how he takes it. He brings his hand hard across her face. Her flesh receives it fiercely, already stinging with the cold wind. She cries her pain. And he hears, and he sees, and he’s sorry and he’s hugging her, hugging and kissing her, and everything’s fine again. Everything is just fine.

“Fool,” he says. “I keep my boat up from the water, but away from the cliff. Besides, I shall move it before the autumn storms.” He laughs so suddenly it alarms her. “At summer’s end we shall sail away, together. Where would you most like me to take you?”

She needs no thought to answer that. “Brittany.”

His fingers unflexing, he releases her hand. She looks in query. He seems entranced, his eyes set only upon the sea. He has no further thought of her. She repeats in her head what the runes have shown her. She is the Horse, and they are the Torch, and together she’ll reclaim the Ring of her kin-garth, their ancestral property.

But . . . Latinate logic hits her head, grinding against the Anglo-Dane of her. She can only attain her kin’s ancestral lands if Guillan remains his father’s heir. And here he is talking of them sailing the world—for him, that blue plain is his demesne, his inheritance. He cares not if his father disinherits him. That is not what she wants.

He turns on her, a wild look in his eyes. Fear hits her, clenching her belly, drenching her body with bilious waves. Has he head her thoughts? What now if he attacks her? What hope for her? She ought to have brought her father’s blade with her. Why learn defence if . . .

But . . . “They’ll try to thwart me.” His voice sounds rippled through with . . . is it rage? Not directed at her as she feared, yet such fierce emotion, still it scares her. “They’ll try every way. But, my heart, my Torch, all their efforts shall only work to make us stronger. Our every triumph, their every defeat, shall be another sword in our fist, another wind in our sails, another shoe to our feet.”

“It will not be yet,” he says, and teases out the tangles from her wind-tousled hair. “First, we shall have this summer to . . . perfect our joining. We shall make merry, is that how your Danes say it? Make merry time and again before this summer ends. And Hell take the one who stands in our way be that your mother or Felebruge’s old hearth-sitter.”

She clamps tight to her thoughts for she doesn’t much like the way of his talk. But then he’s nibbling her neck, and sucking her earlobes and . . . ay-yi-yi, aroused, she is melting into him. And there’s nothing to worry her there, for the runes have said . . .

No! I shout, desperate for her to hear me. No, Arvina, you cannot, must not. No! He’s unstable. Mad. In the end he will kill you. I have to tell her, I have somehow to reach her. Guillan has read his runes wrong. It’s him who’s the Torch. I’ve read enough now to understand that.

I woke from the dream in such agitation a nurse came running with something to calm me. Another injection? I fetched that from her thoughts, though this is the first one I had noticed.