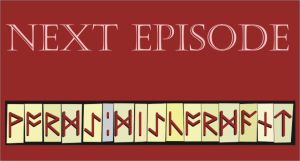 I opened my eyes and there she was, head held to one side at what seemed an awkward angle. I probably smiled.

I still wasn’t terrifically aware of my body. Less so of my thoughts. Which were my thoughts; which were Arvina’s?

“You’re back. And you know who I am this time?”

I may have nodded. But how many times had I not known her? I nodded again. “Madeleine.”

I shook my head. Such a small movement I wasn’t sure that she’d seen. “No. Arvina isn’t me and I’m not her.”

How could we be each other when she had lived so long ago. We were connected, is all: joined by Failans Farm and through her rune-carved rod, her gand-stangir. I liked that name; I’d use it now in preference to others.

“Well,” my friendly psychiatrist said, “I don’t want to tire you, or over-burden you. You need time to recover. I’ll visit again tomorrow. Is there anything you’d like me to bring in for you?”

“You want to phone your friend Hermione?”

She’d have liked it best if I’d said yes. It would be the normal thing; it would show my recovery. Shame, then, that I intended a different purpose.

“I’ve some searching to do, on the internet.”

She tried not to react, yet I saw her pull back. “I’m not sure about that. You can scare yourself by knowing too much.”

I scrunched my head into my shoulders, a kinda shrug. “Then you’ll look it up for me?”

“Richmond, in Yorkshire. Three brothers: Alan, Nihel and Stefan, each in turn was its lord. I want to know when. Oh, and the youngest, Stefan, was also a count in Brittany. Can you find that for me? And anything else you can find of them, especially of Alan—he was also called Le Roussel. Then I want a really good, in-depth book on the runes.” I wanted to ask, too, for the rune-rod, the gand-stangir, but decided it was best to wait for my parents to visit—I wondered if they already had, and, if so, how many times.

And while I waited for the books and the information, mostly I slept. Sleeping allowed Arvina to share her memories with me. And that seemed for her a most pressing need.

“Who was this visitor today?” the old lady Lifa asks and casts a look at her family around her, gathered in the hall for their night-meal (a heavy soup made of left-over meat, gathered greens and roots from the grass-yard). “I heard a hound not ours.”

“That was Brun’s,” Olfsten tells her.

Eadkin halts his spoon midway to his mouth. “Now what does the man want, ever brooding mischief.”

What did he want? Arvina’s mother—Gunnhild—asks, panic loud in her voice. I knew I should not have gone to Cavestun.

There was no trouble, Her mother hasn’t long returned; Arvina hasn’t yet a chance to say about the sheriff’s son.

Olfsten laughs—Olfsten often laughs; Arvina likes Olfsten; I like Olfsten—and in his roundabout way he tells of the visit. “Big throated, that one, though all that’s big of him is his aspiration. Forget him, he’s nothing but a paltry devil. Besides, he was after no trouble. He came with our lord sheriff’s son. Guillan—remember him? Remember how his ma was gone from his hand and that hand so young? Remember how aggrieved he was at it, telling one, telling all, that his ma was fey-folk, and that she’d return for him?”

You met him? The panic remains in Gunnhild’s voice. Or were you wise, and stayed out of the way?

“Aye,” Lifa says, unaware of their head-speech. “And she’ll return when all’s full of snow and no place to remain. Not easy, that thrum of life, when you’re waxing young.”

But his mother isn’t fey, says Arvina. She isn’t dead. She’s Bellinn. He’s like us, one of our kind.

Any would think her own mother fey, the way her face paled, eyes closed, lips mumbling, probably a prayer. Aye, but to whose god does she pray? Will that habit of hers never be broken?

And you showed yourself to him? her mother says as accusation.

I didn’t know who—I just felt a Bellinn’s touch and . . . Aye, I left the loom to see who it was. He’s a higher nock than me, Mother. And he, too, was born after the Oath.

Gunnhild ought to know what that means in all its horror, for she, too, has suffered the stigma having twice broken the Oath. But . . .

You’re to stay away from him. No, we’ll say no more, not in this place; I shall talk to you later. And with that Gunnhild turns her back on Arvina, a full-formed barrier, even if ostensibly only to chat to Syllan, Syllan who is suddenly all enquiries about the new child.

It’s later that Gunnhild corners Arvina. “Come with me. We’ll top the water-butts for Lifa.” With such a kind-seeming purpose, how can she refuse her mother despite she knows her mother’s true intent.

Laden with two leather buckets apiece, hung upon long wooden yokes, they’re out of the garth-gate and crossing the meadow, the glare of the late sun in their eyes, before Gunnhild ventures a prompt.

“He’s this past week returned from the king’s court.” This he had told Arvina, this and much more, before taking his leave. “His mother deserted him—can you imagine how that must feel? Then, when his father took a new wife, he was packed off—not wanted by his new family—off to court to be educated with the king’s son.”

“The king’s son, no less? Many get worse. But, tell me, how old is this Guillan?”

Despite the wooden yoke inhibiting her shoulders Arvina manages a ‘don’t know’ shrug. “Sixteen . . . ish. Most likely. He’s no beard that I noticed.”

“You know, that Eadkin ought to do something to fill in these ruts. If this were the king’s highway . . .” Gunnhild is for the moment distracted by other concerns.

But it is true: the ruts, cut deep through years of carting harvests, still hold water despite the weather hasn’t drawn into full showers for several days. And flies gather around those puddles. Tiny. Annoying. They release in Arvina a reeling memory of lights seen in the night sky back at year’s start. The Northmen had called it ‘the ride of the gods’, and said it foreboded some great event. Aye, and soon after, King Henry and a great many of his men had ridden into Normandy to battle with King Henry’s own brother. Hegrea, however, had dismissed their talk; it was only a star-storm, she’d said. It was not, as some of the northern Bellinn said it, the angels hoofing out the Asars again.

“You were saying of the sheriff’s son?” Gunnhild prompts a return to their talk.

“Guill—ah, Little William, of course. So, how old was he when ‘packed off’ to the king’s court—to be educated with the king’s son?”

Arvina tries to remember the conversation, but . . . “He didn’t say, not in so many words. Only of ‘these past seven years at Henry’s court’.”

That’s where he’d met the rune-master. His saviour, he’d said, for his life had been so wretched till then, without his intervention he swore he’d have ended it, Bellinn though he was.

“Sixteen now, been away seven years?” Gunnhild grunts disparagingly. “No, more likely been away since seven years old; nine years away, more like. But the king of nine years back didn’t have any sons. And neither did the present king till three years back. Or was he implying the Bastard’s ‘red’ son? A ripe education that would have been for him.”

“Are you calling him a liar?” asks Arvina, distinctly bristly.

“Are you defending him?” her mother retorts. Then, “Oh, I see how it is. He’s a handsome lad, and you are smitten.”

“I am not! And just because he says something that’s not full-true, doesn’t make him . . . less. It’s right what Hegrea says of you: You think you’ve got God in your garden. It’s like you’ve never left that convent, not fully. And worse, you try to swaddle me in that same black raiment.”

She is full-tired of always being tied to her mother’s past! She wants to be faring and flying and putting her mother far to the back of her. She wonders, now, would it be so terrible to accept the life Guillan was offering? After all, what can her mother offer her? This life of chores?

Yet Arvina feels compelled to apologise. “But, Mother, you do see what I’m saying? Abandoned by his mother, off-loaded by his father, shunned by the Bellinn because of his birth, of course he’s going to clutch to one such as I.”

“Clutch? Now that is an interesting choice of word,” her mother says, unmoved, calmness itself. “So that’s what he’s done to you: tied you to him. Bound you. Doubtless using some Bellinn trick—some trick you weren’t even aware of. Oh, Arvina, Arvina, what to do with you! And I thought here you’d be safe. But, no, it would have been safer to leave you in Yorkshire with Atall.”

No further words pass between them, all the way down to the stream and back. Arvina feels sick to her stomach. They don’t usually quarrel like this.