. . .  a small village off the main highway southeast of Norwich qualifies for both the blog projects I’ve set myself for this year—Norfolk Broads, and A Hundred Walks (walks in the old hundred of Henstead). But I confess, I did the walk in two parts, a week and a half apart, there being too much to see to cram it all into one day. But that suits the theme I’ve discovered of Surlingham, one of ‘duality’.

1: The village forms the northeast corner of the old Henstead hundred, kissed by the River Yare on both sides (see map)

2: In the past the village has looked both to the adjacent fens, marshes and broads—for reed and sedge for thatching, for fish and eels, for the eggs, feathers and flesh of waterfowl—and to the land that rises from that flatland into rolling fields that hide beneath their fertile soils the spoils of the Ice Age—clays and gravels that provided the basis for a thriving brick industry until recent years. 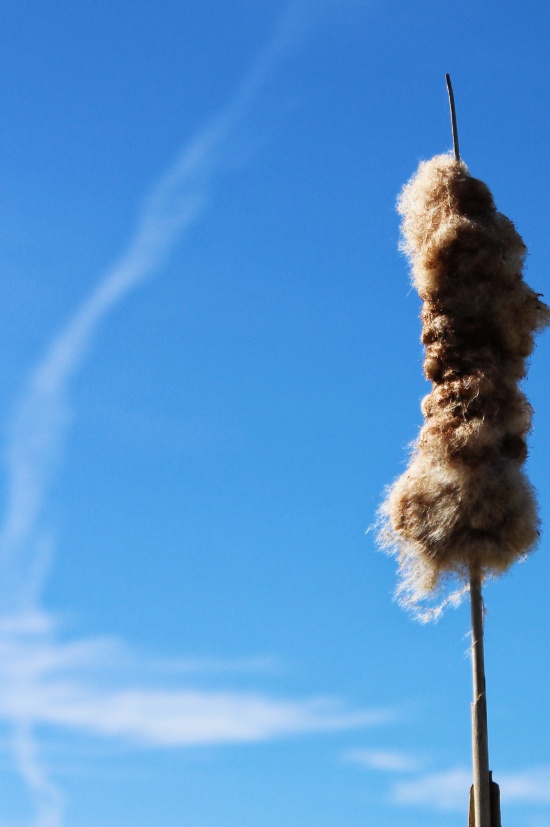 A fertile field of rape, sweet-smelling in the (rather stiff) breezes this day

One of 124 round towered churches existing in Norfolk. But, alas, St Mary’s church shows a mishmash of styles

While St Mary’s church has suffered from heavy post-Reformation restyling, St Saviour’s church is now a ruin, its rugged flint walls topping a small rise that overlooks the river valley. 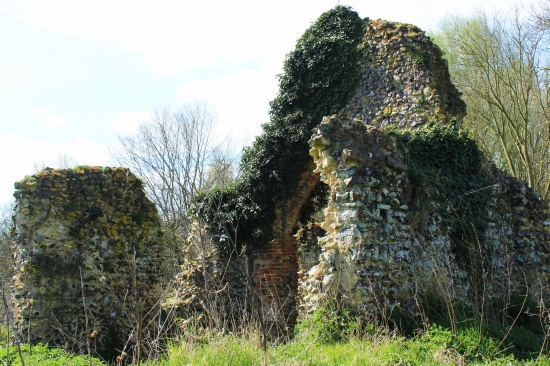 Between the two parishes ran (still runs) a small stream, through mire and marsh. 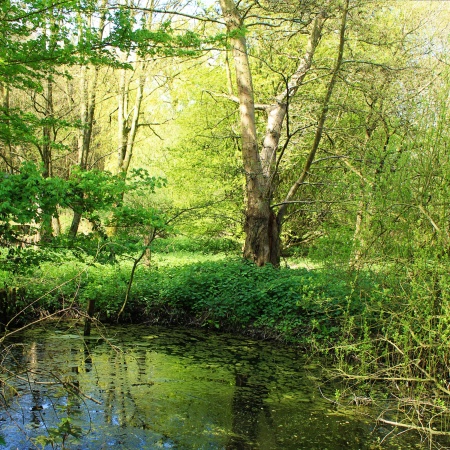 4: At the time of the Domesday Survey (1086), Surlingham hosted two main landholders.

188 of its acres were granted to Roger Bigod, then sheriff of Norfolk and Suffolk and steward to the King’s Household, progenitor of the later Earls of Norfolk and Suffolk; he let the manor to Aitard de Vaux. The de Vaux family were holders of the barony of Gilsland in Cumbria, an area much disputed with the Scots.

The church at Hellington doesn’t really belong to this account . . . except that I had to pass it, and I couldn’t possibly do that without stopping to take some more photos. (see ‘The Confusing Case of  the Norman Arches‘). And I’m glad that I did. See next photo.

The Confusing Case of  the Norman Arches

North door, Hellington church. Perhaps not as ornate as the south door but all the more enchanting for that . . .despite I had to wade through an overgrowth of vegetation to reach it. But it was worth it.

Roger Bigod held a further 68 acres, distributed across the Henstead parishes of Surlingham, Yelverton, Bramerton and Rockland, which by 1086 he had put into the hands of Ranulf fitzWalter.

Looking back at Hellington and the bridge over Hellington Run . . . of old, the boundary between the Hundreds of Henstead and Loddon

The second main landholder was Godric ‘the Sewer’, onetime steward to the rebellious Ralf de Gaël, Earl of Norfolk and Suffolk (exiled in 1075). Godric held a total of 300 acres spread across Surlingham and neighbouring Holverston, Rockland, Bramerton and Kirby Bedon. This was all land previously held by various freemen of Edwin, a household thegn of Edward the Confessor’s whose will is extant. It is believed this Edwin was uncle to Godric—i.e. that Godric was son to Edwin’s sister, Wulfgyth, whose will is also extant—which would explain how Godric came to be granted so much of Edwin’s and his men’s former lands, and that of Wulfgyth’s other two sons, Ulketil/Ulfkil and Ketil. The same Ulfkil (Ulfketil) held various smallholdings throughout the area, with 12 acres in Surlingham. 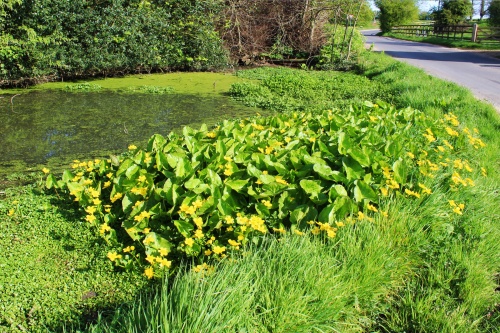 Village pond ablaze with Marsh Marigolds, at Rockland St Mary, on the way from Hellington to Surlingham

William, Bishop of Norfolk and Suffolk, whose see at the time was still at North Elmham, a small village north of East Dereham, also held a small manor of 35 acres of the king, half of which he let to William de Noyers.

5: And finally, there is that other feature for which, today, Surlingham is best known: it has two nature reserves. Wheatfen, and Church Marshes.

Managed by the Royal Society for Protection of Birds (RSPB), the marsh is sited across the river from RSPB’s other Yare reserve: Strumpshaw Fen. The two reserves provide much the same habitat—reedbeds, fens and pools—for much the same species of birds—marsh harriers, kingfishers, water rails, reed and sedge warblers, bitterns, gadwalls and shovelers and various other native or over-wintering wetland birds. The difference? Church Marsh is open all year round, with no entrance charge!

I confess, I only skirted the reserve’s southern edge, this being my second visit to Surlingham in less than two weeks and my eyes had been somewhat glutted on deep reed-beds and river edges. And so I probably missed out on the unique wetland flora. (And with my luck, I’d have probably missed out the birds as well).

Horsetails . . . I’m guessing they are the ‘Water’ variety.

More horsetails, but these are probably either the ‘Wood’ or the ‘Marsh type 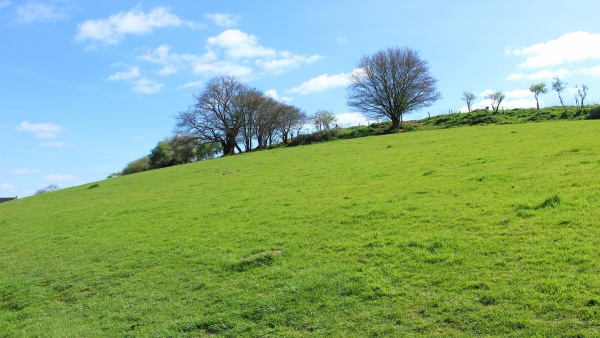 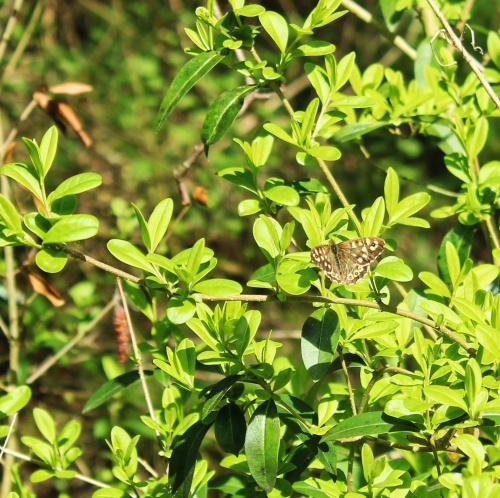 Forget the birds, I saw butterflies. This is a Speckled Wood, my first ever sighting. And it most obligingly posed for me!

According to the Ted Ellis Trust, who manages the reserve, “Wheatfen Broad is one of the few remaining areas of the once extensive Yare Valley swamp…a strange primitive area recognised as a Site of Special Scientific Interest…one of the last tidal marshes of the Yare Valley.” The reserve warden told us it had flooded 25 times that winter!

The visitor’s first sight of the reserve, however, is more of a ‘managed’ site . . .

But, swamp. And primitive. Apt words for the 130 acres of woodland, open fen, reed beds, sallow carr and two small broads, Wheatfen and Deep Waters. In choosing photos to use for Wheatfen I have kept these words uppermost in my mind.

The Ted Ellis Trust was founded to preserve this fragile ecology, to keep the land and its wildlife accessible for everyone interested in Nature. 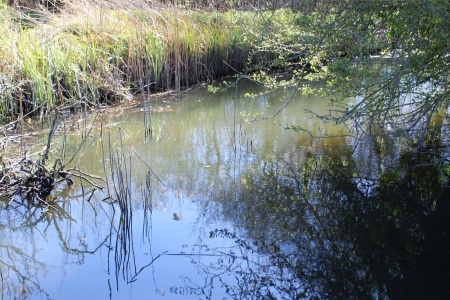 I’m sure there should be a ‘Jenny Greenteeth’ emerge from here, to carry down to their death any impertinent young men!

To snaffle another quote from the Wheatfen website, this given by TV botanist, author, and environmental campaigner David Bellamy, patron of the Trust:

“Wheatfen Broad is, in its way, as important as Mount Everest or the giant redwood forests of North America. It is probably the best bit of fenland we have because we know so much about it. That is purely because one man gave his life trying to understand it – Ted Ellis”. 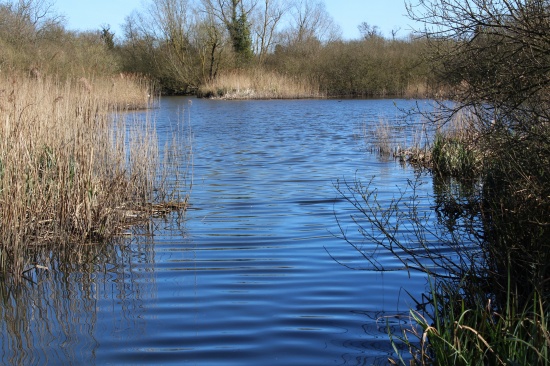 One of the two broads at Wheatfen

Ted Ellis, known to readers of the local Eastern Daily Press for his nature column, and to viewers of local television, was from 1928-1956 Keeper of Natural History at the Castle Museum, Norwich. From 1946 till his death in 1986, he lived with his wife in a cottage at Wheatfen Broad (the cottage still exists). A naturalist with a national reputation, his research work highly respected by the academic world, yet with the ability to communicate his enthusiasm to everyone.

Willow at Wheatfen . . . reflections on wildlife

His enthusiasm certainly did much to encourage me. I remember reading his columns, and seeing him on TV. It was a delight to walk around this reserve—though it took far longer than I’d intended.

Beyond the field of rape there lies Rockland Broad . . . which I would have visited (on both my visits to Surlingham) if I’d had time. But it must wait for another day.