Scotland has its mountains; Cumbria its lakes; Wales its valleys; the South its Downs, stones and circles. East Anglia has skies which became the inspiration for the Norwich School of artists.

So, with no resort to the dramatic, here are some Norfolk skies. Most are incidental to the picture’s main subject. Peaceful browsing . . .

Clouds brooding above the Norwich-London tacks at Forncett

A month later and there are still brooding clouds over Forncett. I took this photo for the pylon.

Scudding away to leave a clear sky; here a field of ripening grain in Lothingland (between Gt Yarmouth & Lowestoft)

Though these clouds might look like they presage rain, they are, in fact, a good indication of good walking weather. Photo taken along Weavers Way north of Stalham

On the way to Upton from Acle, these rain-laden clouds are heading for Great Yarmouth (Yippee, I wasn’t there that day though I had caught an earlier downpour while on the way to the bus. 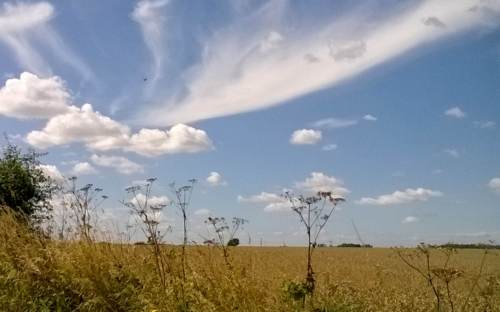 Taken this Tuesday from Marriotts Way, silken darts over Costessey

And sometimes we have blue skies. This photo of the Bure marshes was taken from a riverside walk just outside Great Yarmouth

Spinner of Asaric and Mythic tales
View all posts by crispina kemp →
This entry was posted in Photos and tagged Norfolk, Photos, Skies. Bookmark the permalink.

4 Responses to Under The Sky