For this week’s walk I headed south — which means I had to cross the river.

There’s been a bridge over the Yare since 1417. Before then travellers had to rely on a ferry. But it wasn’t until 1553 that the bridge was altered to make it a drawbridge. To allow shipping through? Nope. The burgesses of Yarmouth invested in a drawbridge for the exact same reason as a castle has a drawbridge – as defence. The burgesses of Yarmouth, at great risk to themselves, had not only supported but had actively aided Queen Mary to take the English throne (See Foundations 1, The Family, on Crimson’s History which give the background). The bridge lasted till 1570 when strong tides and ‘tempestuous’ weather swept it away. A new bridge was rapidly raised.

There had been two ferries over the Yare in the reign of Edward II (1307-1327). In addition to the Haven Ferry—which took only foot traffic—there was a horse ferry further down river. That horse ferry was still operating in the 1980s (as a foot & cycle ferry) but with the closure of the Birds Eye factory it was no longer viable. The two ferries were separately owned. The downriver (horse) ferry belonged to the manor of Gorleston – in 1509 the ferryman paid 8s. 4d. rent to his lord. The foot ferry belonged to the burgesses of Yarmouth.

Haven Bridge—still a drawbridge (Source: Alex Drozd on Flickr)
Imagine the chaos this causes to traffic in and out of town. And the newer Breydon Bridge, built to serve the bypass, must also open and all to allow the cruisers–with their tall aerials—to pass.

Once over the river I’m into foreign territory—or so it must have seemed during the inter-town battles of the medieval-through-Tudor period. (See A Town Of Three Rivers). Peace reigns now that Southtown (formerly Little Yarmouth) is part of the borough of Great Yarmouth.

The bus deposits me at the south end of the High Street of Gorleston-on-Sea. Yep, you’ve got it. I’m spending the day at the beach.

But why go to Gorleston when Yarmouth boasts one of the best beaches in the country?

Yeah, and Yarmouth also boasts a seafront loud with amusement arcades, plus an amusement park with white-knuckle rides, and the smells of hot dogs and candyfloss and . . . you get the picture. Gorleston, however, has always been the quiet, reserved, posh resort.

Gorleston is mentioned in the Domesday Book—when it was the manor of Earl Gyrth, King Harold’s brother. It shared with Great Yarmouth the North Sea herring fishing; it also produced its own salt from salt-pans to preserve the fish. However, by Edwardian times the herring stocks were dwindling—though Yarmouth retained its fleet until the late 1960s. But while fish lost importance, tourism gained, and Gorleston blossomed as a seaside resort.

With a white sandy beach the equal of its neighbour, a promenade on three levels, a theatre, a pier, a bandstand, and the obligatory model boat pond, Gorleston became a favourite for the ‘quieter types’.

Gorleston Pavilion Theatre.
The architecture is typical of the Edwardian resort.
(To my shame, I have never attended a show here).

But enough of tourism. Back to the walk. To reach the beach I have first to walk alongside the river. Now without its fishing industry, and its North Sea ferry to Denmark, it still receives cargos of timber from Scandinavia, industrial grade salt, and sometimes organic fertiliser—our noses alert us to the delivery! But the port’s prime raison d’être is to service the North Sea gas rigs.

Yet in places the history of the port seeps through, such as with the remains of the dolphins here.

Ribs of an old dolphin, fronted by granite boulders, from Scandinavia, with high mica content—hence the glitter.

Yeah, I know, those posts sticking up don’t look a thing like the ribs of a dolphin. Wrong dolphin. In this context (quote from Wiki):

“A dolphin is a man-made marine structure that extends above the water level and is not connected to shore.

These are ‘mooring dolphins’, and their remains can be found, on the Gorleston/Southtown side of the river, from here to beyond Breydon Bridge—where there is actually a modern version in harsh cold metal.

Just before the Yare veers sharply to port to disgorge its turbid waters into the North Sea, there is the Royal National Lifeboat Institution’s station. 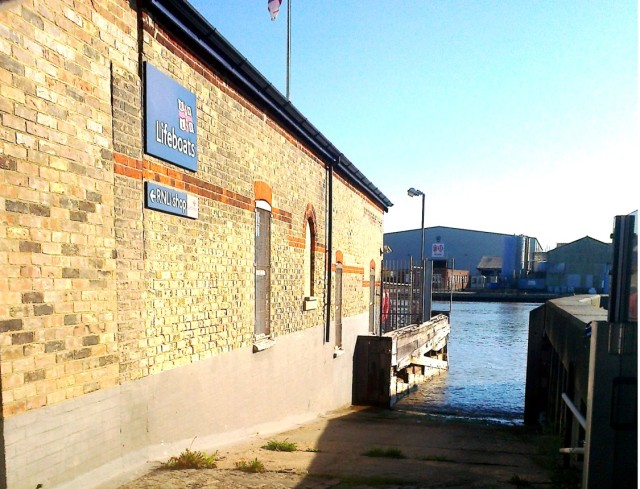 Since Great Yarmouth and Gorleston share a river it makes sense that they should share a lifeboat. Yet it wasn’t always so. They only merged in 1926.

The Great Yarmouth lifeboat was the earlier, beginning service in 1802. Not that it was called out. In 1825 it was replaced by a boat funded and manned by the Norfolk Association for Saving the Lives of Shipwrecked Mariners. The RNLI took over the station in 1857 and two years later built a new lifeboat house—at a cost of £375, It closed in 1919.

The current lifeboat, a Trent class–Samarbeta (Swedish for ‘working together’)—was officially named in 1996 by Princess Alexandra, The Hon Lady Ogilvy. 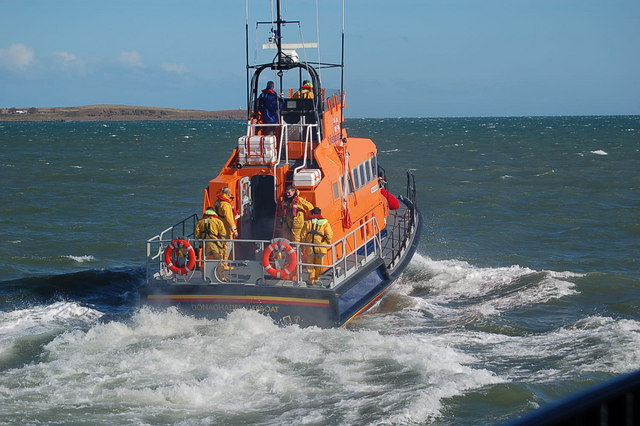 Where the Yare turns to meet the sea it broadens to a pool capable of accommodating a ‘3-point turn’ of the general class of shipping handled at this haven—though it does need the pilot’s service to achieve it without serious damage to harbour walls! 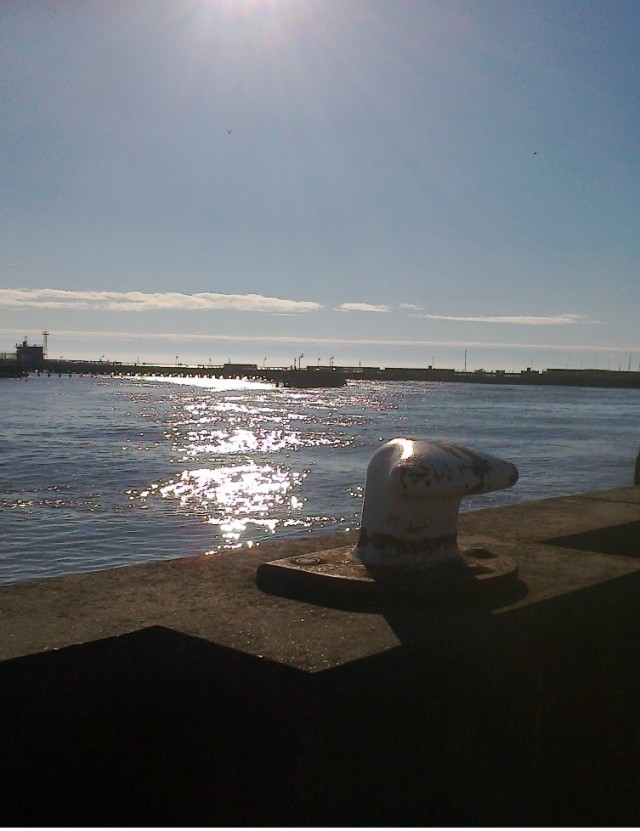 Yare Haven ‘pool’.
Blinded by the sun, I could hardly see the old wooden dolphins on the opposite shore, a reminder of busier days.

And can a port exist without a lighthouse?

While taking that photo I heard behind me the telltale sounds of the pilot’s boat.

Though I couldn’t yet see it, I knew that just beyond the harbour’s mouth would be a ship waiting for the pilot to bring her in.

The pilot brings the ship in

By her colours I’m guessing this is a ship of the Putford line, a supply vessel for the North Sea rigs, taking out food and other essentials (replacement tools, DVDs—toilet paper), bringing back various wastes (industrial, organic, human).

She’s the Putford Achiever.
I love the deep bellied sound of her engines as the water in the ‘pool’ catches and amplifies it. With the bigger ships the ground beneath your feet can noticeably throb along with it.

Before hitting the beach I walked out to the end of South Pier. Originally built in 1560 by the Dutch engineer Joas Johnson (See A Town Of Three Rivers), it’s now much repaired and strengthened. I’m here to see our White Elephant, aka the Outer Harbour, that adheres to the river’s North Pier, fronting South Denes

Work began in June 2007. The idea was to provide a container and passenger terminal, to compete with Felixstowe, to attract beefier shipping, a return of our North Sea ferry—and ultimately to convince the Ministry of Transport that the A47 really does need to be widened and dual-carriageway constructed. The estimated cost of project was £75m.

Nothing. The Ministry of Transport had said: ‘Show us you have the need of a dual-carriageway for the A47 by showing us the increased traffic.’ The shipping said, ‘Show us first the improved roads.’ Stalemate. Wasted money. The Outer Harbour has never been used. It wouldn’t even pose for a decent photo!

So, I turned back to the beach.

Looking back at Gorleston cliffs from the end of South Pier.
The weather forecast said less than 5% chance of rain. But those clouds you see above the town slowly gathered, and blackened. Humph!

I hit the beach as soon as able. Although Norfolk isn’t as flat as it’s made out to be it doesn’t have high hills (maximum high point is 300’, though that is more or less straight up from the sea); in their absence, beach-walking can’t be bettered for strengthening legs—which is the reason for these walks.

As I crossed Haven Bridge I’d noticed that the tide was high. It now was ebbing, leaving behind a newly-scoured strand dotted with shells and sparkling stones. Most of the stones here came from the Cromer Ridge on the North Norfolk coast. A glacial deposit, though flint and quartz predominates, rarer stones can sometimes be found—jet from Whitby, amber from the Baltic. I’ve picked up several fossils here, and a stone with the Fehu rune pecked on it. Nature’s own script? A Viking stone? Or some modern joker? Who knows. It has pride of place amongst my collection (along with the Mesolithic flint core picked up at West Kennet in Wiltshire).

There’s something about walking along the surf-line, especially when the sea is as placid as it was this day. Yet every so often a wave would crash in and startle me out of my reverie.

Some distance along I suddenly missed what had been a characteristic feature of Gorleston beach—the groynes. They are still there, but only their tops could be seen. It’s fifteen years since I’ve walked this beach; in those years the sand has come along and covered them up, though they still exist further along, at Corton.

Groynes at Gorleston (sourced from Google Images)
I did take some photos but am ashamed to say there’s not one straight horizon amongst them!

The Polite Notice gives warning that, should we proceed further along the beach we’re going to be stuck when the tide comes in because, for now, there are no exits off the beach. But that can’t be so; I’ve walked this beach through to Lowestoft many a time. Nope, it can’t be done now. An entire stretch of beach has been closed while sea defences are constructed.

So I took no notice. The tide was going out. I’d keep walking until either I tired (remembering I had yet to walk back) or I encountered said construction work. As it happened, it was something entirely different that caused me to halt and return.

An extreme High Water Mark. Notice the bands of pebbles.

For those following Feast Fables, you might remember Kerrid musing on the extreme tides of autumn and spring. The above photo clearly demonstrates it. High tide doesn’t reach this high for the rest of the year. Yet for 2 or 3 days around the equinoctial full moon and again around the new moon, the sea twice a day reaches to here. The abrupt battering is caused by the waves’ undertow. It literally scours the beach.

The stumps you see in the background are all that is visible of the sea defences here (hence the need to renew). Above those stunted remains of the sea defences, are the cliffs. I was hoping to find a recent slippage to show how these cliffs are 100% loose sand but the cliffs didn’t oblige.

Farther along — the sea defences as they should be.
The headland in the distance is Lowestoft Ness, the most easterly point in Great Britain.

I don’t know if you can see it clearly on the photo, but after the next groyne the sea comes in—right up to the sea defences. And on the next stretch of beach, beyond the second groyne, the sea was topping those sea defences. I’m not too happy at getting squeezed between crumbling cliffs and the cold North Sea, so I decided now was the time to turn around.

By the time I’d completed the return journey to catch the bus home, I had walked six miles, two-thirds of which was on sand. I was pleased. My legs weren’t hurting, I still had ample energy—though I confess, I didn’t do the dance aerobics, only the weights.

And next week’s walk? Weather permitting, I’m heading inland—to visit a glacial terminal moraine; as featured in this painting . . . 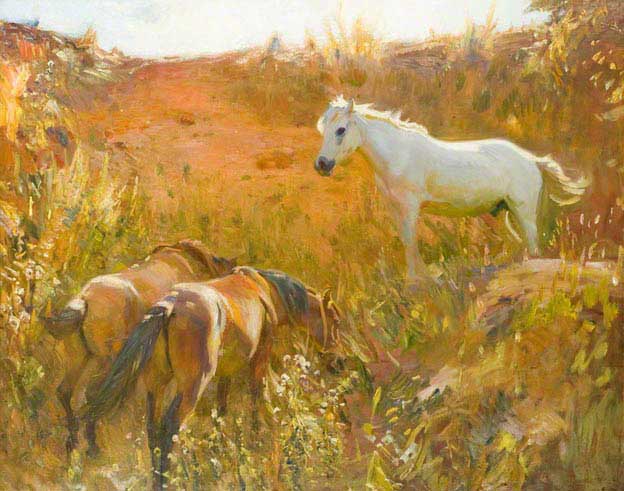 14 Responses to A Posh Resort