Lo! Toli here, bringing you cheer, so wrap a mit around a mead and pull yourself a chair.

Not Homer, you say? So answer I, where is Homer? Here telling you tales? Na, this is Toli here, bringing you cheer, Toli’s Tall Tale Number Two.

And this tale, I swear, is all totally true – and did Homer ever say that? But I know this tale’s true cos my grandfa told me it, told it to me when I was no more than a chubby cheeked cub at his knee. And my grandfa, see, lived close by Maringtorp which place, you might know, was named for the pit in this tale.

Now, in the good days – before this present King Willie – there lived at Maringtorp two brothers, widow’s sons, Wit and Wat. And Wit and Wat were as different as two peas could be. See, Wit was tall while Wat was not. And Wit was thin while Wat was not. And Wit could swim while Wat could not. And Wat was clever though Wit thought him not. But what Wat and Wit both were together was ever keen-eyed for that extra edible thing. Now don’t you ill-judge them on that. Me, being a widow’s son too, I know how it was, though I had the fortune to have me a pa so I’ve ne’er been as keen-eyed as them.

Tale starts one late year, coming to winter, the yale-yard already stripped and looking unpromising. The widow having no work for them, Wit and Wat had oft to town and there had lurked along the lanes, hoping some cart or a wagon would wobble along and spill part of its wares. A quick scramble and into the pockets and gone, and there they’d have, maybe for a day or so, some what to eat. But the day’s take hadn’t happened, and Wat’s big belly was hollow and wanting.

“You know that pit across the moor?” Wat said, tentative-like cos he didn’t know if his brother would take it.

Wit groaned all theatrical-like and yawned extra-loud. “You heard of the gold,” he said.

Wit laughed. “What, you saw the gold? You’re taking me for a simple? Listen, Wat, you dithering duff-head, if gold was waiting down there at Pit’s bum, why hasn’t no other yet fetched it up?”

Wat thought about that before he answered. “Likely cos they’ve not got a Wit for a brother. See, Wit, I’ve been thinking on it while walking the lanes not getting hot. Come with me, I’ll show you.”

Now Mare’s Pit was far across the moor, not set aside their road to home. So Wit looked around, seeking a reason to refuse him.

“Come on,” Wat said and started to drag at his arm. “If we walk fresh we can be there and home before dark.”

“Best be,” Wit said. “Nasty things happen on that moor.”

It were not the time of year, this late of day, to go venturing there, and well Wit knew it. Yet he allowed Wat to push and to pull and cajole him along. “Might find some fool’s meat,” Wat said, meaning some mushrooms, for a fair few did grow there.

Wit stood between sun and pit and shivered while Wat pointed in. “See?” Wit didn’t want to edge closer yet he had to admit, down there, there was a glimmer that could have been gold. He stood upon tiptoes and stretched to peer over.

“Like I said,” Wat said, “no other has a brother named Wit. I reckon a ladder will do it.”

“What, put the ladder in and climb down?” Wit didn’t like the sound of it.

“Na. Put the ladder across and then lean down.”

Wit had to concede, it weren’t a bad plan. “Tomorrow,” he said.

“At dawn,” agreed Wat. They could use Feggi’s ladder. The thatcher had left it by their house these two days-past while swiving their mother.

So dawn comes around and they’re out of the house, nabbed the ladder, and away to the moor. Gold’s still aglitter deep in that pit. They put basket down and lay ladder over.

“I’ll steady,” said Wat. “You lay a-ladder and stretch your arm down.”

But stretch though he did with the stick in his hand, never did Wit with the wood touch gold.

“Fetch us the basket,” said Wit. They’d brought it for carrying home the gold. “Now tie it onto the stick.”

But even with this lengthening device, still Wit, stick and basket didn’t touch gold.

But though he slipped his body into the cold and dark water still Wit’s feet didn’t touch gold. So he lowered more of his body in. And more. Soon he’d lowered it all but his head which stuck out, his arms all atremble as he clutched to the ladder. But still Wit couldn’t touch gold.

“I’m making a dive for it,” Wit said and Wat rubbed his hands. Though Wit hadn’t known it, this had been part of Wat’s plan all along.

Wit upended like he was a duck and was gone. Wat waited, rubbing his hands though not to warm them.

Bubbles burbled, one after another. Wat waited, rubbing his hands though not to keep warm.

The bubbles stopped burping, no new ones appeared. Wat peered over, into the pit, filled with that dark foulsome water. But that water lay still. Where was his brother?

With uttermost care, Wat lay the length of the ladder the better to peer into the dark and cold water. But not even a hint of Wit was there.

Wat stretched his arm into the water, hoping to brush against his brother – and another’s hand grabbed him.

“Wit!” he had time to exclaim, all overcome with excitement, relief and – then fear.

Out of that dark foul water a woman appeared. Golden her hair, but green her skin – and blackened her teeth that glinted in the pale morning light, sharper than a cat’s sharpened by fight.

She cackled, throwing over her shoulder one very long breast while her claw-ended fingers raked into Wat’s flesh. “Two little brothers for me to eat. It’s been so long. A real Christmas treat.” And into the pit she pulled Wit’s brother Wat.

Down and down she dragged him while above the silent black waters closed over. 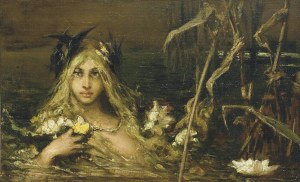 I hear by your silence you’re stunned. Likely you want to ask, as I asked of my grandfa when he told the tale, “What happened to Wit and Wat the brothers? How’d they get out?”

And I, like my grandfa, must answer. They did not.

Now I’ll leave you to think upon that.

Spinner of Asaric and Mythic tales
View all posts by crispina kemp →
This entry was posted in Mostly Micro and tagged Folklore, Toli's Tall Tales. Bookmark the permalink.